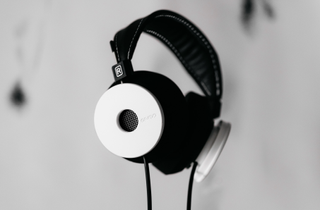 When news of a special edition set of Grado headphones is brought to our attention, we stop what we're doing and pay attention – Grado has produced some excellent on-ears over the years; premium cans that have gained top marks from this publication.

The White Headphone, launched today and slated for August availability, is a makeover of Grado's GS1000e pair, which belong to the Statement Series that sits just underneath the company's flagship Professional Series.

The makeover has rendered them visually quite different to the understated originals. The White Headphone is a look Mary Quant would've carried off with ease in the swinging '60s. White accenting on the ear cups essentially creates two white discs which pop strongly against the black ear pads. There's also a thicker, contrast-stitched top-grain leather headband.

President and CEO of Grado Labs, John Grado, said the new design is "inspired by one of our family’s favourite records," adding, "The White Headphone by Grado commemorates the power that an album – or even just a single song – may have on a person’s life."

We're not sure if Mr. Grado means The Beatles' White Album, or Cream's The White Room... or any other track mentioning white, but either way, sonic inspiration always works for us.

The White Headphone will be available in both the UK and US, priced at £795 including VAT. Details on US pricing are yet to be released, but when we know, so shall you.

Grado also says this special edition model will be available in "very limited" quantities, so if you think they're far out, best act quickly.