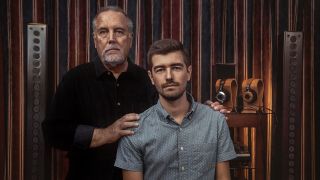 “I don’t think of us as this worldly company,” says John Grado down the phone to What Hi-Fi? from his Grado Labs office desk in Brooklyn, NY.

Since being founded by John’s uncle Joseph Grado in 1953, Grado has been a family-owned cartridge business residing in the building John’s father built in 1918.

“My grandfather had a fruit store on the first floor and wanted to build a grocery store conglomerate," says John. "Thankfully his sons weren't interested, otherwise that’s probably what I’d be doing today. We joke that he was the first one to sell Apple products!”

Joseph was the inventor of the stereo moving coil cartridge, owning the patent, but many years after his nephew John’s first involvement with the company as a 12-year-old in 1965, Grado branched out into headphones, including What Hi-Fi? Award-winners, such as the SR325e and SR80e.

Fast forward to today – some 25 years after Bluetooth headphones arrived on the scene – and Grado has just launched its first pair of wireless headphones, the GW100.

It’s fair to say that Grado does things at its own pace, but there is a reason for that...

Why wireless? Why now?

“Grado’s main focus has always been the sound. People have been on at us for years to do wireless or closed designs, but we know anything we put out there would be expected to sound like our open headphones. They’d be compared to what we have already.

“Over the years we’ve experimented, but felt we couldn’t get anything that would satisfy the user as being equal to what we do with our open headphones. We could have made them for years – but that’s not our main objective. Our reputation is more important. It’s hard enough building one, and even harder keeping it!

“There’s always going to be a need for wired headphones. The wired market always keeps us busy. Jet Blue [the airline] orders a couple of thousand pairs a month – they can’t use Bluetooth because of the interference.

“But we always knew that eventually we’d have to go wireless, and we always looked at things we could do. Right now we still feel a wired headphone sounds better, but we think we did a really good job with the GW100s.”

“The GW100s took two years, so you could say we’ve been in the wireless headphone business for that long.

The GW100 isn’t the end of Grado jumping into the water, so what has the company done to ensure the GW100s make the grade?

“It’s not that I don’t want to tell you… there’s a speaker, a wire and an implosion to hold it together. We’re a little protective so there are some secrets. We’re like chefs, we have recipes, we add a little of this, a little of that. It’s all in how we damp the driver and hold the housing.”

Open back? No noise-cancelling?

Two things many will question about the GW100s are their open-back design and lack of noise-cancelling. Wireless headphones are inherently for on-the-go use, so why allow sound to come in or out?

“If it’s dead quiet, someone may be able to hear something playing, but when I’m at my desk and people are walking around and papers are shuffling, someone sitting five feet from me can’t hear them. And that’s something we’re proud of.

“The leakage has been noticeably reduced, and anyway, it’s nice to be able to hear something like a horn honking or a friend coming up to you. It’s like when people were out and about with a boombox! But it’s not like the music is secondary."

And then there’s the uniquely consistent, agricultural aesthetic that dates back to the brand’s first headphones over 50 years ago...

“Every once in a while, someone will say they look old-fashioned, but we have more people saying they like the look. And that’s why we stuck with it for the GW100. It’s kind of an updated look, but if you see someone walk down the street you can tell it’s a Grado straight away.”

Cartridges and headphones is an unusual exclusive pairing for a hi-fi business, but one that has clearly worked for Grado. You could say Grado fell into headphones in the 1990s, until then it had been largely a cartridge-only company, a few dabblings in turntable and speaker systems aside. Jon takes up the story...

“In the early 1960s there was the record changer, which we couldn’t compete with. So in 1963-64, we stopped speaker and turntable manufacturing and concentrated on the phono cartridge market. In 1980 we hit our peak; we were shifting 10,000 phono cartridges a week. Then the CD came out and, so in the 1990s, that dropped to 12,000 a year. We lost most of our distributors around the world.

“My uncle and I always tinkered with speakers, so we had the acoustic knowledge. Headphones were kind of second class next to stereo systems, but we thought that every child would have a laptop for school and they’d want headphones. We never envisaged the iPods or smartphones – they were just a bonus. When I bought the company from my uncle in 1990, we slowly got into the headphone business. We had to rebuild our reputation...

“I was ambitious. I was designing speaker systems and chief designers at Marantz, Sid Smith and Dick Siquara, were going to do the electronics. But in December 1994, Stereophile reviewed our SR60 headphones [the latest editions are pictured] and we went to CES in January to introduce them officially. Then we had a $600 headphone, and we had this $60 headphone. We came back from the show and our business took off like a rocket. We made an executive decision to stick with headphones. The speakers are always there, we just love doing headphones."

"For as long as we can keep this thing going"

And cartridges too, evidently. “The cartridge business picked up in the 2000s, what with the newer generations getting back into music. As they mature in age, I see an increased interest in a two-channel system too. We never expected to be making phono cartridges in 2018. I don’t think it’ll ever go away.

“We’re currently working on Bluetooth in-ears that possibly would be noise-cancelling, because we understand there’s a need for it. It is nice to have a product that fills an area in the industry we’re in.”

John seems to be making good on that next jump in the water, then, but how big a fish will Grado be in an ever-expanding sea?

“We could try to grow this thing much bigger than it is. But I wouldn’t want to be dealing with lawyers, stockholders… we’ve built the business and it’s enjoyable as it is. Our design works within our parameters. We have machines we’ve been using for 40 years – they get the job done. This is who we are, we produce products that we like.

“My son, Jonathan (27), is into marketing and Matthew (23) is interested in the operations side. I don’t ever expect to retire – I like getting my hands dirty – but one day I will relinquish the chain of command. This is going to be theirs.

“If the boys weren’t interested I don’t think I would sell, I’d rather just ride off into the sunset. Grado will be family owned as long as we can keep this thing going.”

WHF: What was your first hi-fi system?
JG: Fisher integrated receiver, Garrard turntable, Sansui speakers. My older brother and I bought it together in the late 1960s.

What was the first piece of music you bought?
The Beatles’ Eight Days A Week on 7in vinyl. I’m a product of the ‘60s, and a big Beatles fan. My best friend from kindergarten, Mark Prevara (Billy Joel’s saxophonist), and I formed the ‘Junior Beatles’ when we were young.

Jonathan [John’s son] used to work with Sonos and was introduced to Giles Martin, George Martin’s son, who had a broken pair of Grado RS1s. We sorted him out with a pair. He finished Paul McCartney’s album and re-did the vocal using Grado headphones.

What’s your reference system?
I have two systems, and this goes back to when I was designing speakers. I had a solid-state and tube system, and I’d just switch between the two.

The equipment I have is getting on for 24 years old. I have manufacturers wanting to send me stuff – several hundred thousand dollar systems – but this is my system, my reference point. If I throw something else in there I lose my reference.

Your three favourite Grado products?
Firstly, the Grado SR60, because that’s the one that gave us credibility. It launched in 1994 and we’re still producing them. It's 25 years old now and has had three generations. We only come out with new models when we feel we have something new that’s worthwhile, and that applies all the way up the line.

I always thought of the SR60 as a seed. We were giving people an opportunity to get into the Grado world, and then they end up moving up the line. People ask, "what gets better?", and the easiest way to explain the answer is it that you keep the signature Grado sound, you just get more and more information.

Then the RS1 headphone, as it was our first wooden headphone. We would build parts here for the RS1 – do 25 wooden housings at a time. But now a friend of the family, who used to make wood pens, does all our woodwork now. We are his only client so it’s really an extension of us. It’s very controlled.

The third? Everything else.

Which rival product do you admire the most?
I can’t really think of rival products that spring to mind, but I do admire companies that are successful. There are always ups and downs, so any company that gets its product out there and is successful, I admire – whether they’re a competitor or not.