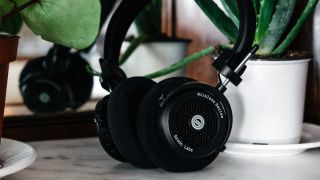 ‘Since 1953 Grado Labs has adapted at our own pace’, proclaims Grado's website, in defence of the fact that more than a decade after rivals started producing Bluetooth headphones, the company is only just launching its first pair.

Grado isn’t shy about that fact, saying it wanted to wait until wireless performance had reached a certain level.

Now is apparently that time, and the £200 GW100s stand as the brand’s inaugural efforts.

Very much Grado in both aesthetic and engineering design, the GW100s utilise the signature drivers found in the brand’s wired models - good news considering we’re huge fans of Grado headphones’ consistently impressive sound. Here, the drivers have simply been configured and fine-tuned for the different enclosures used.

They also claim to be the world’s first open-back Bluetooth headphones, which isn’t a wholly surprising feat considering headphones that inherently leak sound aren’t typically regarded as ideal on-the-go companions. That said, Grado says it has designed the speaker housings and internals from the ground up to notably diminish sound leakage by up to 60 per cent compared to its wired models.

The GW100s use Bluetooth version 4.2 (not the latest 5.0 version) with aptX, and based on playback at 50 per cent volume their battery can supposedly last 15 hours on a single charge.

The brand’s website also remarks that the GW100s are ‘the first step in what’s to come’, so we could see more wireless cans – maybe even a wireless noise-cancelling pair – soon.

For now, though, we simply look forward to hearing how the Grado GW100s fare against the class-leading likes of the AKG N60NC Wireless and B&W P7 Wireless...

13 pairs of headphones walk away with What Hi-Fi? 2018 Awards

Black Friday 2018: when is it? What is it? Everything you need to know