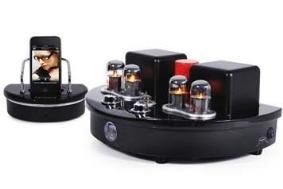 The FatDock enables wireless streaming from an iPod or iPhone to the amp, while the latter can of course also be used as part of a standard hi-fi system.

Round the back of the FatDock you'll find a 3.5mm input and a USB output, alongside the standard Apple docking connection, while a receiver, for connecting to your amp, and a remote are included, too.

The iTubes themselves have three pairs of RCA inputs, another 3.5mm input and a subwoofer out connection.

The above prices include the FatDock and a three year warranty.