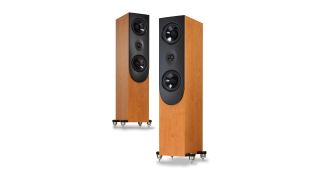 Falcon Acoustics - the largest UK supplier of drive units - has just unveiled the first of its new V series of speakers at High End Munich.

The HP.80 floorstanders are a two-way vented design with each slim cabinet housing twin 18cm mid/bass units and a 28mm dome tweeter positioned in the middle. The former cones are made of a Twaron/Graphene composite, a material developed and manufactured in-house.

Those cabinets are hand-built by an Italian specialist and the front baffle is shaped to minimise diffraction effects. Equally, the driver apertures are chamfered to reduce compression effects and improve dynamics.

The HP.80 floorstanders are scheduled for launch in September, and are expected to retail for around £13,000 per pair, suggesting that the V series will sit between the company's 2018-launched R.A.M and Reference ranges.