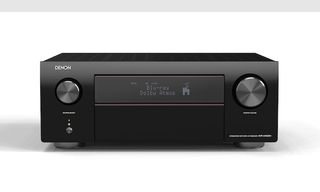 Denon launched its £3499 AVC-X8500H 13.2-channel flagship AV amp at CES earlier this year, and now we finally have details about the brand’s complete home cinema amplifier line-up for 2018.

The former features 5.1 channels, delivering 130 watts into each of them, and five HDMI inputs, three of which have full HDCP 2.2 support for 4K HDR passthrough.

Bluetooth is onboard for offline music streaming, and there’s decoding for Dolby TrueHD and DTS-HD Master Audio formats.

The AVR-X550BT shares its sibling’s specs, expanding them with a second subwoofer channel and a USB input.

It’s also the starting point for Amazon Alexa voice control (users can, for example, ask Alexa to stream music, switch inputs or change volume); the inclusion of a phono input; and HEOS network streaming, which opens doors to streaming services (including Spotify and Amazon Music) and multi-room functionality.

The AVR-X1500H and every model above will also be among the first AV amps (along with Marantz’s 2018 models) to get Apple's AirPlay 2 in August.

All eight of its HDMI inputs have full HDCP 2.2 support, and there are two HDMI outputs for simultaneously connecting two displays.

The AVR-X2500H (£549) adds two more HDMI inputs and an extra 5 watts per channel. Denon has kept the same DAC that featured in last year’s AVR-X2400H but has worked to improve USB performance.

The AVR-X3500H (£899), meanwhile, introduces HDMI eARC (enhanced audio return channel) to the line-up and is due to arrive via an update in August.

Last but far from least, and sitting directly below the flagship AVC-X8500H, is the 11-channel, 205wpc AVC-X6500H (£2349), which further builds on the features mentioned above with a tuner input.