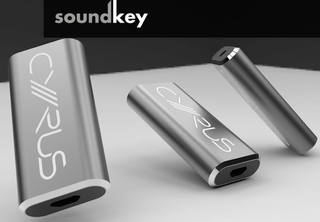 Last month, Cyrus announced it would be turning to Kickstarter to help fund the production of its new SoundKey micro DAC. The project went live on 1st July and has already surpassed the £50,000 goal. Cyrus says it managed to raise the full amount within the first few hours of going live.

At the time of writing, the project has raised nearly £65,000. Cyrus has outlined a number of new funding goals on the Kickstarter page, with each goal 'unlocking' a new colour finish. The current finish is black, with blue being unlocked at £70,000. The SoundKey will be made available in a champagne finish if it reaches £100,000.

The Kickstarter campaign (here) will stay live until the end of the month, with backers able to secure a SoundKey DAC for 30% less than the retail price.

Audioquest arguably pioneered the micro DAC and launched its own phone and tablet-compatible DAC earlier this year, the DragonFly Black (£89).

Cyrus managing director, Simon Freethy, explained the reasons for choosing Kickstarter: “There’s a whole new generation of music lovers who just don’t know how good the music on their phones can sound, as it’s let down by the low-quality DACs and amplifiers employed in the phone. The Cyrus engineers, using their 30 years’ experience building products that provide a better music experience, have come up with a world-beating solution in the diminutive SoundKey.”

You can register your interest on the SoundKey microsite and pre-order one on Kickstarter by pleding £69. The project will run until 30th July, with shipping expected to be in November.