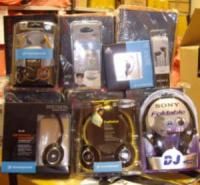 The sentence is one of the heaviest ever given for trading in counterfeit goods in the UK.

Reeder was sentenced this morning at Portsmouth Crown Court, as more details emerged of the size of the counterfeit goods operation he had been running: he's believed to be one of the most prolific sellers of counterfeit consumer electronics merchandise in UK history.

Information provided by Sennheiser, another major victim of Reeder's operations, reveals that Portsmouth Trading Standards raids on Reeder involved the seizure of over 4000 items worth a total of £250,000.

A sample of the haul is shown left.

However, those 4000 items are believed to be just 1% of the items in Reeder's possession at the time: he operated a number of websites selling these counterfeit goods.

The raids followed customer complaints about the quality of the products being sold by Reeder's websites, with Sennheiser UK marketing director Peter May saying that 'at one point we estimated that almost 80% of all the complaints we received were due to the fake products he was selling illegally under our brand name'.

Volker Bartels, Sennheiser's President of Corporate Services and spokesperson of the Executive Management Board said of the outcome of the case: “This is why Sennheiser launched a global anti-counterfeit campaign last year. We will not accept fake product in the market place as we want to protect our customers from fraud.”

Peter Emmett, Trading Standards Manager at Portsmouth City Council, said: 'This has been the most complex and difficult investigation ever undertaken by our team, producing more than 2,000 pages of evidence.

'We are very satisfied that Mr Reeder has been convicted for his criminal behaviour and we’ll now be asking the court to order refunds for customers who gave statements about the fakes they purchased and who were never given their money back.'

An internet trader is due to be sentenced this Friday, following the UK's largest-ever seizure of counterfeit Monster products.

Michael Reeder, of Port Solent, Hampshire, denied 13 offences, but was convicted of all counts at Portsmouth Crown Court four weeks ago.

He now faces a possible jail sentence or fines running into thousands of pounds, and a further hearing next month will look into confiscating the money he made from his illegal activities.

The convictions follow a complex 18-month investigation conducted by the Trading Standards Service in partnership with Monster investigators. Following complaints to Monster about Reeder's website, Odds and Pods. Monster started the investigation with its investigative firm C3i Europe.

Once sufficient evidence had been gained, Monster handed the case over to UK TSS to carry to Court for prosecution.

Reeder was already subject to a 2009 court enforcement order by his local council for failing to supply products on time and give refunds. Prior to the 2011 raid, customers had complained to Monster and Trading Standards about headphones bought from Odds and Pods, noting minor packaging discrepancies and faults including buzzing and poor sound quality.

In August 2011, Reeder told TSS officers he had stopped trading, but customs at East Midlands Airport seized more counterfeit products, leading to the discovery that he was still operating, this time as Nice Cans.

Evidence showed that Reeder imported the products through a contact in China, who was not an authorized supplier.

David Tognotti, Monster’s General Manager & Vice President of Operations, says, 'Everyone at Monster is gratified that this long and complex investigation has finally reached such a favourable conclusion.

'The sale of counterfeit products literally hurts everyone, including manufacturers and retailers, but most especially honest consumers who might have no idea that the goods they purchase are not genuine.'