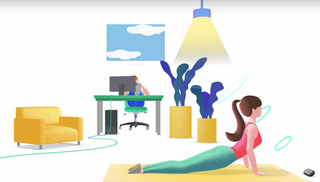 According to Samsung, "S-Ray helps people avoid having to put on earphones for a long time that can cause ear pain, and avoids the distractions to others that Bluetooth speakers can cause."

The way this new concept will work in everyday life is currently… unclear. There's an explanatory video – an animation of a person doing yoga, shopping at a supermarket and visiting a gallery, with directional sound being pushed towards them in each situation.

Samsung says a variety of product options "such as Neckband, Handy and smartphone cover" will be shown at CES 2018.

We're skeptical. If you've got a packed day - going to your yoga session as well as shopping, for example - you'll have to carry two pairs of speakers rather than one pair of headphones, which isn't particularly practical.

Also, we've seen similar designs from JBL, in the form of the Soundgear from 2017, and the LG Tone Studio, which combines this concept with traditional headphones, and they're yet to capture the hearts of the general public. Still, who knows – 2018 may be the year this innovative technology takes the streets by storm...

LG kicks off 2018 with Atmos soundbars and smart speakers

70 years since the transistor began to change the world