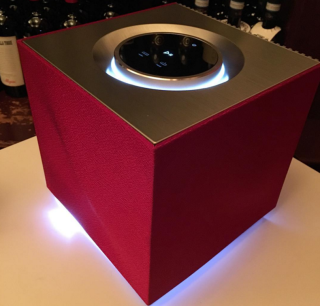 It wasn't just about the new product launches though, we were also able to spend some time getting a closer look at some of the products we've already seen from the show. The Technics Grand Class SL1200G turntable, Panasonic TX-65XD900 and LG's Signature 65OLEDG6 were all given the hands-on treatment.

On day three, Naim introduced a smaller brother to its Award-winning Mu-so wireless speaker. The Mu-so Qb is a compact cube-shaped speaker housing five speaker drivers, two bass radiators and a custom-made woofer powered by its own 100W amp. It comes packing the same 32-bit DSP found in its bigger sibling, as well as the touchscreen volume control. It's available from March, priced £595.

MORE: Naim Mu-so Qb - a compact £595 wireless speaker to sit alongside the Mu-so

Bang & Olufsen announced a rather interesting looking product in the BeoSound 35. It's an internet-connected music system with Spotify, Deezer and TuneIn radio all built-in alongside DLNA, AirPlay and Bluetooth connections. It can be used as part of a BeoLink Multiroom system and goes on sale from mid-April for £1745.

American manufacturer McIntosh had three new products to show off on day three: the MX122 AV processor, MB50 streaming audio player and the RS100 wireless speaker. The MX122 supports a wide range of audio codecs, including Dolby Atmos, and can handle 4K sources through any of its seven HDMI inputs.

Meanwhile, the MB50 can play music from a range of sources and has several streaming services built in to the accompanying app - the same services can be used with the RS100 wireless speaker. Up to 16 speakers can be paired together to create a multi-room system.

The Red, meanwhile, has a higher price tag due to its more advanced DAC. It also has a digital volume control compared with the analogue one found on the Black.

Finally, the Beetle DAC is designed to be a desktop DAC and comes with optical and USB connections.

Sony announced five new products, comprising three soundbars, a soundbase and a soundbar surround package, all of which are due out in April.

The flagship HT-NT5 has a slimline design and two, three-way speakers under the hood. It comes with a newly-designed subwoofer and can support 4K and hi-res audio. The other soundbar models are the HT-CT790 and HT-CT390, which sit alongside the HT-XT2 soundbase.

Finally, the HT-RT3 surround packge is made up of a soundbar, subwoofer and two wired rear speakers. All soundbar and soundbase models come with built-in wi-fi and Bluetooth, and also support wireless multi-room audio.

Philips announced two new soundbars at CES 2016, including one that supports Dolby Atmos using 18 drivers to emulate a 5.1.2 Atmos surround system. A compact soundbar that takes up less space in front of the TV was also on show.

There were several new additions to Philips' range of headphones, including the new Flite series, comprising two over-ear models and one in-ear model. Other new pairs included the HX1 and HX5 with built-in LEDs that pulsate to the music and new sports-orientated models.

The TX-65XD900 ticks the television buzzword boxes of CES 2016 - 4K Ultra HD resolution and UHD Premium specification - and promises better-than-ever picture performance. First impressions of the screen are positive, with impressive detail and clarity on offer, not to mention deep blacks.

We certainly can't wait to get one in for review.

One of the big highlights from day two of CES 2016 was the announcement of a new Technics turntable. The Grand Class SL-1200G has resurrected the SL-1200 series and is aimed at audiophiles and DJs alike thanks to its direct drive motor.

Our first impressions are that it's a detailed, clear and accurate deck, but that's something you might expect with a $4000 pricetag. Nonetheless, it has been one of the stand-out products for us so far at CES and we're looking forward to getting our hands on one to review.

Wandering around the showfloor, LG's new Signature OLED TV certainly caught our eye. Another TV that ticks every buzzword box and then some, it's a 4K Ultra HD OLED TV with HDR and Dolby Vision support, meets the UHD Premium specification and even has a transforming speaker base.

But does the picture look any good? If our first eyes-on is anything to go by, then yes, it really does. Blacks are properly black and the detail is impressive. The TV is also alarmingly thin, at just 2.7mm, with most of the electronics housed in the speaker base, which either acts as the TV's stand, or can be removed to allow the TV to be wall-mounted.

We also managed to spend some time with one of Sony's new TVs, the 65XD93. It's part of Sony's new 'Slice of Living' design philosophy which sees a new, slimmer design and a redesigned base with cable management.

It's a 4K Ultra HD TV and meets the UHD Premium specification, although Sony has opted to use its own 4K HDR logo as opposed to the official UHD Alliance one. With some 4K demo footage playing, the Sony showed it was more than capable of handling motion with ease.

In 2015, Sony's TVs weren't perhaps quite as good as they should have been, but the early signs are that Sony has improved for 2016.