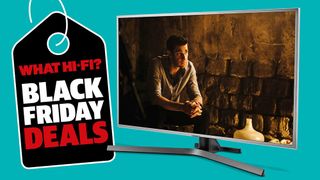 Black Friday is now the world's biggest shopping event. The retail day began as a sales extravaganza in the USA following Thanksgiving, but has now spread around the globe, bringing thousands of deals to high street and online retailers. And as more and more people shop online, Black Friday 2020 will surely only be bigger than ever.

The big shopping giants such as Amazon, Best Buy and Walmart dominate the Black Friday deals, expect smaller shops to be just as competitive on price - and perhaps with closer attention to customer service. That's why we will be covering audio experts such as Crutchfield and World Wide Stereo just as closely when the Black Friday 2020 deals begin to arrive.

Black Friday always takes place on the Friday after Thanksgiving, which means this year it will fall on Friday 27th November. Most retailers will want to make the most of what will typically be the busiest 24 hours of the event, meaning we can expect deals going live at midnight and running until the end of the day.

Of course, you can rest assured that Black Friday won't be simply one day of deals – those days are long gone. Instead, expect at least a week of build-up, maybe longer, from many retailers. And of course, the Black Friday sales continue through to Cyber Monday, which is always the Monday after Black Friday.

What is Black Friday?

Black Friday began in the US but in recent years has very much become a worldwide shopping phenomena. It's regarded (and backed up by stats) as the busiest shopping day of the year – both online and in-store – and officially kicks off the holiday season.

Why is it called Black Friday? The date was traditionally the start of the Christmas shopping season, when retailers hoped to move out of the "red" (loss) and in to the "black" (profit), hence Black Friday.

What about Cyber Monday?

The term 'Cyber Monday', meanwhile, was coined by Scott Silverman and the National Retail Federation's Ellen Davis in a bid to encourage people to take their shopping online during the Black Friday event. That was back in 2005, when people needed such encouragement! It's always the Monday after Black Friday.

Where to get the best Black Friday deals?

4K TVs, smart and Bluetooth speakers and wireless headphones will almost guaranteed be on offer at pretty much every electronics retailer, and those looking to buy into, or build upon, an Alexa ecosystem will surely be able to save money on Fire streamer or tablet or Echo speaker.

The likes of Best Buy and Walmart will always go big on games console bundles ahead of the holiday season, and as OLED continues to be such a buzzword, some cheap OLED TV deals are as sure as night follows day.

We're confident the specialist audio and home theater retailers will deliver some hi-fi and home theater bargains – last year's What Hi-Fi? Award-winners are a good place to start when it comes to finding a price reduction.

How long will Black Friday last?

Well, Black Friday is 24 hours. And Cyber Monday is 24 hours. But like Amazon Prime Day and the January sales, these events always have preliminary and aftermath offers.

For one, deals will run during the weekend sandwiched in the middle of the two days. And in the days and weeks building up to them, there will be plenty of 'pre-Black Friday' savings serenading the sites.

Are the Black Friday deals any good?

After the initial few years of excitement around Black Friday, we naturally moved to the apathy stage, as people began to question whether the offers were genuinely good deals. And it remains up for debate.

For example, it's not unusual to see discounted products rise in price in the summer months ahead of a "price cut" come Black Friday; naturally this means you're essentially just getting the original discounted price from earlier in the year. That said, there are always genuine deals to be had – it's just finding them amongst the onslaught of offers.

Luckily that's where our service will come in; we'll handpick the best TV, audio and AV deals across retailers to find the ones that are really worth your hard-earned cash.

We'd suggest having a rough idea of what you want in mind – whether that be noise-cancelling headphones under $100, a discounted 55 inch 4K OLED TV or a portable, outdoor-friendly Bluetooth speaker – but restricting yourself only to specific models will reduce your chance of being lucky in the Black Friday and Cyber Monday sales. Pick the features you fancy, then see what ticks your boxes and has the best Black Friday discount.

What Black Friday deals can you expect?

Take a look at last year's best Black Friday US deals below – you can even see how the prices compare a few months later...

Black Friday 2019 deals from around the web

Sony WF-1000X wireless earbuds $79
This is the original, first-generation model of Sony's wireless earbuds so while there is a newer WF-1000XM3 version offering improved noise-cancelling, bigger battery and better sound, for the bargain hunter, we don't think you can argue with this discount.View Deal

Apple HomePod smart speaker $199.99 Best Buy
Discounts on Apple products are hard to come by, so this $50 saving on the HomePod (in white or black) is a real bargain. If you own an Apple smartphone and subscribe to Apple Music, then you'll find plenty to like.View Deal

Dynaudio XEO 2 Wireless Bookshelf Speakers Pair $699 at World Wide Stereo
You can save a whopping $800 on these awesome streaming speakers. Packed with tech, including Bluetooth and Class D amplification, the Xeo 2s offer plenty of appeal for hi-fi enthusiasts and casual listeners alike. View Deal

Sonos Play:1 wireless speaker $149
Save $50 on the original little Sonos speaker. The Play:1 offers great sound, all the multi-room skills, and the ability to pair two speakers together. There's no voice assistant here, but that might be a good thing for some people...View Deal

Apple iPad Air 256GB with wi-fi (Gold) $597 at Amazon
It's the Gold finish that comes with the best discount for a 256GB wi-fi-only iPad Air, though the Silver version is currently only two dollars more expensive.View Deal

Beats Solo3 Wireless headphones $129
Not the absolute best-sounding headphones around, but they deliver a full-bodied, bold and clear sound and have excellent battery life and range. Oh, and they look good too.
View Deal

Klipsch R6ii earbuds $55.60 Amazon
Stylish, snug, and sounds great – what more do you want in a pair of in-ears? "A discount", you say? Well, here you go!

Sony WH-1000XM3 $278
A What Hi-Fi? Awards 2018 winner. A jack of all trades and master of all; the Sony WH-1000XM3 headphones are a superb all-round package, boasting supreme comfort, natural sound and the best noise-cancelling out there.View Deal

Sony UBP-X700 4K Blu-ray player $150
"The X700 is a fantastic player that makes watching 4K discs an affordable reality... [delivering] a stunningly natural 4K picture for an affordable price," as we said in our five-star review.View Deal

Apple Watch S4 $399
The fitness-focussed Apple Watch Series 4 was succeeded by the Series 5 in September, but there's not a lot to choose between them. You get safety features galore, and even more activity tracking, plus the usual user-friendliness that made Apple's wearable such a success story.View Deal

Apple AirPods (2019) with Wireless Charging Case $154 Looking for a pair of hassle-free true wireless earbuds? The Apple AirPods 2 offer a great combination of performance, reliability and convenience. The wireless charging case offers the most convenient way to top up that battery life, too.View Deal

PS4 Pro 1TB console + Modern Warfare $300
This excellent PS4 Pro deal offers $100 off Sony's flagship console plus one of the best, and newest, games of the year. Get it now while stocks last.View Deal

Amazon Fire TV Stick with Echo (3rd gen) bundle $42
A sophisticated way to get smart functionality to your TV, the Fire TV Stick video streamer gives you multiple streaming services on an intuitive user interface. Pair it with the Echo Dot to get hands-free voice control of your Fire TV with Alexa.View Deal

Microsoft Xbox One S 1TB All Digital Edition Bundle (White) $149
This is one of the best Black Friday gaming deals we've spotted: an Xbox One S console with 1TB of storage plus a bundle of three games (two of which are smash hits), all for under $150. View Deal

Amazon Fire 7 tablet $30, or two for $50
One of the best tablets out there for those on a tight budget. It’s cheap, cheerful, easy to use and has a lot of the functionality of its more costly counterparts.
The 'kid's version' is also on sale, now $60.View Deal

Bose Home Speaker 300 $199
This diminutive Bose home speaker promises 360-degree sound and boasts Alexa and Google Assistant smarts baked right in. You'll get AirPlay 2 support alongside Bluetooth and wifi, meaning if it's on your phone, you can play it on your speaker, too.
View Deal

Samsung 43" 4K UHD TV UN43NU6900 $228
As screen sizes inch ever bigger, 43-inch displays are becoming something of a rarity, but this Samsung TV boasts 4K UHD resolution and over 54% off. You get two HDMI connections and Samsung's SmartThings platform, too. Little money for a 4K bearing the trusted Samsung name. View Deal

Samsung 65-inch UN65NU6900FXZA 4K TV $478
For under $500, the Samsung NU6900 is a solid 4K proposition on paper and in the flesh. An attractive design, numerous HDMI inputs, and Samsung's smart TV experience complete the attractive package.View Deal

Hisense 58-inch 4K UHD Smart TV (58H6550E) $329
4K resolution, Dolby Vision, the gamut of apps in the popular Android operating system and Google Assistant baked in for easy voice control. While we haven't had the pleasure of testing this particular model, it's a serious saving on a 4K smart TV bearing the trusted Hisense name. View Deal