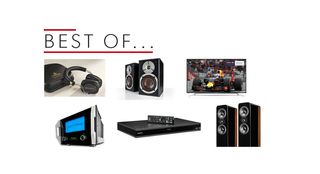 First things first: obviously our week has been dominated by the announcement of the What Hi-Fi? Awards 2017 Products of the Year - as we may have mentioned. But it's been business as usual too...

This week, for example, Bowers & Wilkins announced the E1 headphones for use on Emirates Airlines, McInotsh revealed its most powerful single chassis monobloc and Hisense acquired Toshiba's TV business and production sites.

MORE: The What Hi-Fi? Awards 2017 Products of the Year revealed!

B&W and Emirates Airlines have teamed up to produce what they claim are the first headphones tailored for flying.

The E1s noise-cancelling functionality has been fine-tuned in a way that will "completely cancel ambient engine noise".

They'll be rolled out to Emirates flights from December onwards, though only to those travelling in First Class.

Another week, another announcement of a McIntosh product. This time it's a monoblock amp.

The MC1.25KW directly replaces the MC1.2KW and has been redesigned from the ground up. It's McIntosh's most powerful single chassis monoblock amplifier, capable of delivering 1200 watts of power.

They'll be shipping later this month - although at £29,995 per pair you'll need deep pockets to afford them.

Hisense has gained the licence to use the Toshiba brand for 40 years, along with two factories in Japan and a number of patents relating to Toshiba's TV business.

It's a surprise announcement in light of Toshiba's return to the European market under Vestel's wing, and continues Hisense's growth after it bought Sharp America in 2015.

Freeview research: over half of Brits don’t know how to position their TV

Lyric speaker displays song lyrics as you play your tunes

You can now control your Sonos speakers using Tidal's app

Michael Stipe says R.E.M. in Dolby Atmos is "breath-taking" - and we agree

The Concept 500s are among the most impressive high-end speakers we've heard in recent years.

They are strong in terms of dynamics, with excellent bass along with plenty of inisght and detail. They sound comfortable and composed regardless of what you throw at them.

They're superb performers for the price, and a confident entry into the high-end market for Q Acoustics.

If you want really small speakers on a pretty small budget, you can't go wrong with the Spektor 1s.

They're energetic and entertaining performers, with a good handle on detail and expressive dynamics. And that small size is useful if space is at a premium.

Compact, affordable and with great sound, they're an exciting pair of speakers.

Sony's latest 4K Blu-ray player is a premium effort that aims for the best possible performance.

Insight is impressive, with terrific handling of colour and contrast (though it lacks Dolby Vision). Sound quality is great, with plenty of energy and precision.

This is Sony at the top of their game, putting in a performance that's hard to beat.