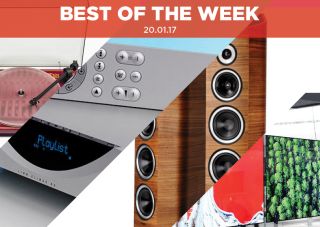 This week Norway took the first step towards an all-digital future, a petition was spotted calling for LG to reintroduce 3D TVs and to celebrate the late George Harrison's birthday, Pro-Ject is producing a limited edition turntable.

Norway has started its move to all-digital radio broadcasts by switching off FM radio in some parts of the country.

Not all FM broadcasts are being switched off at the same time. Instead it will happen on a region-by-region basis, with the whole country expected to be digital-only by the end of the year.

It is estimated that the switch to digital will save £21m a year.

There's a petition to bring back 3D TVs

At CES this month, LG announced its decision to drop 3D from its OLED and LED TVs. One man has decided they've gone too far.

Standing defiantly against LG's stance, Aidan Padden has started a petition aimed at reviving the fortunes of 3D TV. In this case, he has requested that LG includes one 3D-capable OLED TV in its 2018 line-up.

Citing that the lack of 3D leaves him unable to watch his 3D collection, his petition has gained over 5,000 signatures so far. Will you add yours?

MORE: There's a petition to bring back 3D TVs

February marks what would have been the late George Harrison's 74th birthday and to celebrate Pro-Ject has knocked up a new limited edition turntable.

Called the George Harrison Essential III, the look is based on work by artist Shephard Fairey (who also created the Obama 'Hope' poster).

The smartest noise-cancelling headphones in the world?

The best What Hi-Fi? deals of the month - January

Panasonic 2017 TVs - everything you need to know

If price isn't an issue, then Linn's Klimax DS 3 is a must-listen piece of kit.

For an eye-watering price of nearly £16k, you get class-leading sound, a superb build and finish, and strong and varied dynamics.

The omission of digital inputs and lack of DSD playback is a surprise, but you won't find a finer sounding music streamer.

The Charge 2+ sounds like you'd expect from its looks – bold and beefy.

For a speaker of its size it manages to produce a rich, expansive sound that can fill a room. The ability to connect up to three devices at once is a nice feature.

With a price drop knocking it down to £110, you'd be mad not to consider it.

Sonus Faber has made a number of talented products and the Venere S is right up there.

With a big, bold sound, these are impressively musical speakers that deliver music in an appealing way.

They're not the most analytical, but when the sound is this good, we're not that bothered.