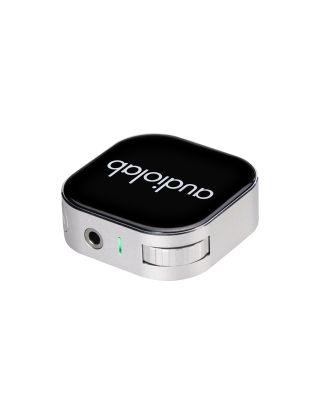 We first got wind of Audiolab’s M-DAC Nano at the Munich Show back in May, but only now do we have full details, including pricing and availability.

The £150 Nano joins the brand’s M-DAC family as the smallest, most affordable and most conveniently mobile member, putting it in competition with budget, portable and mobile-friendly DACs from the likes of Audioquest and iFi.

It’s a slightly different proposition from its competitors, though.

Instead of being wired to a source device at one end and headphones at the other, the M-DAC Nano connects wirelessly to, say, a smartphone via aptX Bluetooth, negating the need for a cable between the user’s device and headphones. More typically, the headphones simply plug straight into the Nano’s 3.5mm input.

A 32-bit/384kHz-capable DAC (which upsamples data received over Bluetooth) and Class H analogue amplification lie at its heart, and there are two audio modes on offer: ‘standard’ and ‘enhanced’.

The latter is designed to optimise sound quality using digital filtering and upscaling, promising around six hours of playback, while the former promises to extend battery life to eight hours.

Its built-in battery supports Qi wireless charging, and another nifty feature of this matchbox-sized, 28g-heavy DAC is a battery-saving function that turns it off after 10 minutes of inactivity.

Volume is adjusted using a side-mounted, 64-step rotary control, which can also be pressed to pause and skip content.

The M-DAC Nano comes with a pouch and is available later this month for £149.