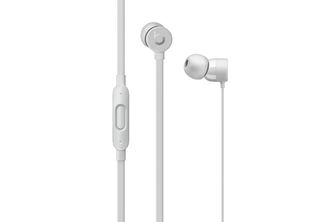 A lot of things were mentioned on Apple's stage yesterday, chief among them iPhone 8 and iPhone X (pronounced 'iPhone Ten', which will be said by no-one). But one thing that slipped unmentioned into Apple's stores (soon to be reimagined as 'Town Squares') is this new pair of lightning headphones: the urBeats3.

Even though the headphone jack was cut in Apple's last smartphone generation, wired connections haven't been outsted yet. The urBeats3 - available in matte silver (pictured above), matte gold or black - plug into phones using the Lightning connection.

But if you're using an older phone (or just want the flexibility of using your headphones across MacBooks, iPads, and anything else, really), Apple is also offering a model with a traditional 3.5mm jack.

According to Apple, the earphones have “fine-tuned acoustic design” with an axial-aligned driver, as well as secure-fit wingtips and magnetic earbuds. On the cable is a 'RemoteTalk' button for launching Siri, taking calls and playback control.

If you want to pick some up, they're retailing at £90 - but remember, there are some alternatives available.