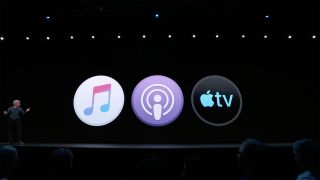 iTunes has been the talk of tech town recently, as rumours circled that the all-encompassing app was living its final days. And this evening, Apple has confirmed its demise at its annual Worldwide Developers Conference (WWDC) event. R.I.P, iTunes.

The media platform is how Apple users have listened to music and podcasts, and watched films and TV shows, for the best part of two decades, but now, at the ripe old age of 18, it gives way to Apple’s new era of services.

The trio will arrive with macOS Catalina (10.15) in the fall, available as a free software update for Macs introduced in mid-2012 or later.

Each exists in its own right, with Apple splitting its entertainment ecosystem into three apps for a clearer, more simplified user experience. So, if you fancy watching a TV show or film, you head to Apple TV. Want to tune into your locally-stored tracks, downloads, playlists or the Apple Music streaming service catalogue? Head to Apple Music. Want to plug into your favourite podcast? You get the idea...

Apple Podcasts opens doors to more than 700,000 podcasts, with a search tool as well as recommendations and curated collections by editors.

At WWDC, Apple naturally talked a fair deal about its forthcoming next-gen iPhone operating system, iOS13, which, in addition to 30 per cent faster Face ID unlock, twice as fast app launch and an all-new Dark Mode interface, is bringing a couple of handy new features to the HomePod.

When iOS13 is released to the public in the fall, HomePod users will be able to seamlessly transfer (or 'hand-off') the music they're listening on their iPhone to their Apple smart speaker (and vice versa) simply by placing the two devices close to one another. When you arrive at home with your music playing through your iPhone, you can carry on listening without having to mess around manually switching connections.

With the update, the HomePod will also be able to distinguish voices to offer a more personalised experience in a household of multiple users. A new sleep timer will allow owners to set their HomePod to stop playing music after a set amount of time.

The HomePod isn't the only Apple audio hardware getting new functionality. The Cupertino giant is introducing an audio share feature for its AirPods, allowing a second pair of AirPods to listen to a song or film soundtrack playing on an iPhone/iPad simply by bringing them close to that device.

The native tvOS operating system behind Apple TV 4K is getting more personal, too. 'Up Next' recommendations will be personalised to your taste - an improvement over the current blanket suggestions - and this will support multiple users too.

And it's good news for Apple Music subscribers who're partial to a sing-a-long. An update to Apple Music will see lyrics appear on-screen in sync with playback.

Apple TV+ streaming service: Everything you need to know