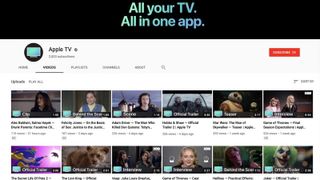 If Apple's new YouTube channel dedicated to Apple TV escaped your notice, you're not alone. The new channel is home to a plethora of film trailers, behind the scenes TV-show clips and interviews, plus content highlighting Apple's original ventures. And naturally there's a trailer for Apple TV+, the Apple streaming service scheduled to debut this autumn.

High traffic for both the Star Wars: The Rise of Skywalker teaser and Game of Thrones clips are likely considering all videos on the channel appear to be ad-free, in stark (sorry) contrast to its ad-swamped competitors.

As spotted by Mac Stories, Apple is making slow steps further into the entertainment and video arena, so the debut of an Apple TV YouTube channel is perhaps unsurprising.

That said, while the channel serves to advertise Apple TV, its videos are mostly unavailable on that service’s app. Trailers for new movies, for example, have previously been showcased via Apple’s iTunes Trailers platform. Alive though inert, and with the iOS app having not received an update in a year, the launch of a YouTube channel could indicate Apple’s plan to can the service.

Apple’s redesigned TV app launches next month in line with tvOS 12.3 and iOS 12.3, and Apple TV+ is slated to premiere this autumn.

Apple TV+ streaming service: Everything you need to know