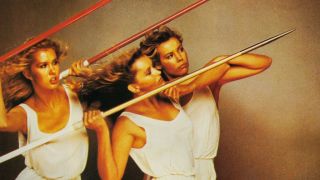 The year? 1980. The premise? Overall, 21 different albums peaked at number one in 1980 in the UK, with 20 unique artists and one compilation hitting the top position. We've removed anything with Greatest Hits in the title, plus compilations from various artists (so The Last Dance, featuring the hits of Diana Ross, Marvin Gaye, Stevie Wonder, The Temptations and more is out), to leave us with 18 albums that topped the UK Album Chart in 1980.

In this music quiz we want you to click on the name of the group or solo artist who released the album. For each question, we've given you the title of each album plus a hint about the act who recorded it. Yes, a few are gimmes since they're self-titled, but to spice it up a bit, you'll see there are four more answers than questions. That's right, we've only gone and added four decoy acts, haven't we? No process of elimination here.

Your time begins the second you hit the play button, when your first album title and hint will appear. Click on the band or artist you think released the chart-topping album, but take your time: you only get one guess. If your estimation is wrong, it'll be listed as an incorrect answer and you move straight to the next question.

Once you've filled in every answer, your quiz score, overall percentage of correct answers and all of those sneaky pitfalls shall be revealed. You could also click 'give up' of course, but we know you won't – there are some absolute classics in this list, as well as one that we struggled to recall at all. And that's actually a great way to describe the year 1980.

Good luck. When you're done, head on over to our social media channels or the What Hi-Fi? forums to let us and other readers know how you got on.

Top the charts with this tricky 1970s music quiz

Test your music knowledge with our Pink Floyd quiz

Quiz: can you name these 10 inaugural products from iconic British hi-fi brands?

Music quiz: Can you name the best-selling vinyl records of the last decade?

Break the bank with our most expensive music videos quiz