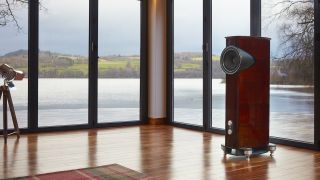 Launching a new hi-fi brand is hard. This isn’t an industry that gets all hot under the collar about hedge-funded, soya latte-powered startups - it’s one that appreciates innovation, sure, but it’s also one to which tradition and pedigree are integral, particularly in the realm of speakers. Generally speaking, hi-fi fans are drawn to the names they’ve known and loved for years.

So, how does a new brand break through and get noticed in a sea of established, highly respected rivals? It starts by pointing out that, while its name is new, its people are pure hi-fi heritage.

Fyne Audio first submitted a speaker for review in early 2018, but the company’s seven founding members have, between them, 200 years of experience in the hi-fi industry. And we’re not talking about people of little contribution; we’re talking about people heavily involved in the development of some of the most important and successful speakers of the last few decades.

The next step in proving your new brand is to be taken seriously is to launch not just one product, but a whole range, at prices designed not to shy away from the established big boys, but to provoke comparisons.

That’s why Fyne launched with not one speaker, or even just one series of speakers - it launched with eight hi-fi speakers across three series, with prices starting at £179 for the F300 entry-level model and topping-out at £18,000 for the F1-10 flagship, and designs encompassing both standmounters and floorstanders. That’s the sort of breadth and depth that Manchester City would be proud of, let alone the more established speaker brands out there.

Of course, flooding the market with products isn’t in and of itself any mark of quality, but Fyne continues to set itself apart with the quality of its engineering and a real dedication to acoustic technology.

Core to the company’s acoustic ambitions is the IsoFlare driver that’s built into the vast majority of the company’s speakers and which radiates energy isotropically to create an outstanding stereo image without the usual, strict sweet-spot. In short, its speakers are less fussy about positioning and where you sit, and that’s thanks to the single point-source drivers that combine bass, mid-range and treble.

IsoFlare is Fyne’s headline technological feature, but it’s not the only one that differentiates its speakers from the competition. The BassTrax feature, which is part of most of the company’s speaker designs, utilises a downward-firing port and so-called Tactrix diffuser to further the ambition of spreading sound throughout the room, ensuring a superior performance wherever you’re sitting or standing in relation to the speaker, while the FyneFlute technology uses variable geometry to avoid the colouration caused by reflections typical in traditional driver designs. It’s FyneFlute that gives Fyne drivers the distinctive notches around their edges.

Why doesn’t every speaker manufacturer follow a similar path if it’s so flipping wonderful? In short, because it’s really, really hard. But, as we’ve already established, Fyne doesn’t shy away from what’s hard.

All of this is great in theory, but it massively relies upon flawless quality control, which is why Fyne doesn’t only design and prototype all of its products on-location in Scotland; it manufactures many of them there, too.

It all adds up to a new speaker brand with the very best of intentions, but intentions can only get you so far. Fyne Audio, though, has already proven itself a speaker brand that can walk-the-walk as well as talk-the-talk, having received two What Hi-Fi? Awards in 2018 - the first year in which it was eligible - and giving a number of those aforementioned established rivals a bloody nose in the process.

Those Awards were for the F302 and F501 floorstanders, which have established new benchmarks at their respective prices (£400 and £1200).

That’s the story so far, but what’s next for this scene-stealing speaker upstart? It’s already added centre speakers and subwoofers to its offering, so movie fans can also now get in on the Fyne act.

A fourth range of hi-fi speakers has been added, too - one that bridges the gap between the mainstream models released to far and the super-exclusive, top-of-the range models. The F700 range, which currently includes just the F702 floorstander but will gain the even more advanced F703 by the end of this month (and the standmount F700 in the summer), brings some of Fyne’s finest features within reach of the majority, and we’re very excited by that prospect.

But if we’re talking about excitement, we really have to mention the F1-12 floorstander, which launches this month and represents the new pinnacle of Fyne’s range. The ‘12’ in the name is important, because it refers to the size of the driver. A new, 12in version of the IsoFlare? We like the sound of that.

Of course, very few of us are lucky enough to be able to afford the £26,000 asking price of the F1-12 speakers, but it is possible for anyone to get a taste of the Fyner (sorry) side of hi-fi by heading along to the Fyne Audio stand at the Bristol Hi-Fi Show, which takes place from the 22nd to 24th of February.

And you can find out more about Fyne Audio by heading to fyneaudio.com