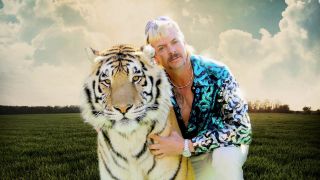 With the novelty of lockdown rapidly wearing off, and the days and weeks stretching out ahead of us, now is the time to invest in a streaming service.

Netflix is one of the best around, with an unprecedented budget and wealth of Netflix Originals series to choose from. These are shows that Netflix has exclusively commissioned or bought, so you won't see them anywhere else.

They include a true crime series you have to see to believe, paranormal goings-on in small town America, a teen sex comedy and possibly the world's most cringeworthy dating show.

The 11 best movies on Netflix

This Netflix Originals series the talk of the internet at the moment, and with one watch you'll see why. This true-crime miniseries explores the life of zookeeper Joe Exotic, and his feud with rival conservationist Carole Baskin, who accuses Exotic of animal abuse. The feud escalates, consuming all parties with tragic results. The cast also includes a former drug lord who runs a secret animal conservation facility and a swinger who uses tiger cubs to attract women. Yep, it really is this bonkers.

No, it's not the Julia Stiles romcom from 2001, but a documentary looking at the Chicago Bulls' record-breaking 1997/98 season, in which they completed their second hat trick of championships (the 'threepeat') of the 90s. Complete with never-before-aired footage and interviews with all the main players (including Michael Jordan, Scottie Pippen, Dennis Rodman and manager Phil Jackson), this is a unique look at the most iconic team in the history of basketball.

Harlan Coben's 2015 novel of the same name gets the Netflix Originals treatment. The eponymous stranger (a mysterious woman in a baseball cap, played by Hannah John-Kamen) tells Adam (Richard Armitage) that his wife faked her pregnancy, which, after a little digging, Adam discovers to be true. From there, the revelations keep coming. Look out for Paul Kaye as a malicious corrupt copper, and Jennifer Saunders as a woman running a cake shop.

Spanish heist drama focussing on an elaborately planned, multi-day assault on the Royal Mint of Spain in Madrid. The robbers have to deal with their hostages and the police simultaneously, while the second series sees them forced out of hiding as they prepare to hit the Bank of Spain. It was the most-watched non-English-language Netflix Originals series, and one of the most-watched overall.

This 1980s-set paranormal drama owes a lot to Stephen King, as it does to supernatural films of the era - E.T., Close Encounters of the Third Kind, Ghostbusters, et al. It concerns a group of childhood friends in small town America, and the investigation into a missing boy. But it soon emerges this is no ordinary missing persons case... While you wait for series four, do yourself a favour and catch up on all the previous seasons.

It's a teen comedy, but not as we know it. While the genre is responsible for some of the most dated, ass-backwards sexual politics ever committed to celluloid (Porky's, anyone?), this series is something else entirely. It follows a socially awkward teenager named Otis (Asa Butterfield), whose mother (Gillian Anderson) is a sex therapist. The humour can be coarse - and frequently hilarious - but it's an empathetic look at how to navigate the choppy waters of teenage romance and sex.

Superman himself Henry Cavill (minus his digital moustache) plays Geralt of Rivia, a magically enhanced monster hunter, also known as a 'witcher'. This Netflix Originals series is based on the short story collections The Last Wish and The Sword of Destiny, which precede the main Witcher goings-on.

This is probably the ultimate in guilty pleasures. Imagine speed dating, but while the participants can talk to each other, they can't actually see each other. And that's the show. Amazingly, two contestants from the first series actually end up getting engaged, having never set eyes on one another. And the marriage ceremony itself? Awkward doesn't quite cover it.

Charlie Brooker's dystopian series moved to Netflix from Channel 4 a few years ago, and with bigger budgets and more cinematic feel, is all the better for it. The storylines are never too far-fetched from what's possible with today's consumer tech, which only makes it all the more disturbing. The current situation feels like something dreamed up for an episode, so what better time to enter Brooker's twisted world?

Subtitled "Hunting an Internet Killer", this Netflix Originals series follows a sadistic loner who starts posting videos of animal cruelty on the internet before going on to carry out a gruesome human murder on camera. And all for the 'fame' it'll bring. Outraged by his early treatment of cats, a gang of internet sleuths start a hunt to find him before he moves onto human pray. Fascinating, if uncomfortable, viewing.

If you haven't seen it by now, what have you been doing with yourself? The most expensive TV series ever made has an ambitious brief: to chart the last 70-odd years of British history as seen through the eyes of the reigning monarch, Queen Elizabeth II. Series three (the most recent) spans 1964 to 1977, from Howard Wilson's election as Prime Minister to Liz's Silver Jubilee, with the excellent Olivia Colman taking over from Claire Foy on the throne.

Based on the 2002 novel of the same name by Richard K. Morgan, this cyberpunk series is set in a world where consciousness can be transferred to other bodies. In the first series, former solider-turned-investigator Takeshi Kovacs (Joel Kinnaman) is approached to solve a murder, while the second sees him search for his lost love.

10 of the best documentaries on Netflix