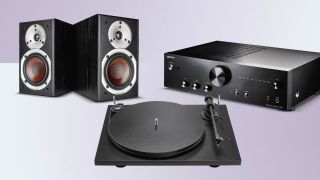 The very act of using a turntable implies a certain dedication on the part of the music listener. Vinyl requires fairly careful handling and a turntable is a delicate instrument that needs attention if it’s to sound its best. And listening to a record requires just a bit of commitment; no scrolling through a playlist or jumping to anther song by a different artist here – you’re in for the duration of the side of an album.

The benefits are great, though, in our opinion – and worth investing in. And it appears plenty of music listeners agree with us, as turntable and vinyl sales are on the rise, and have been for a number of years.

If you’re keen to join this rather old-school musical revolution, this trio of superb performer will show you what all the fuss is about with playing a vinyl disc.

We’ll kick off with the Pro-Ject Primary E turntable. While there are a number of decks around for quite a bit less than the Primary E’s £150 asking price, we would urge you to stretch to at least this sector of the market. Spend any less, and you’ll struggle to see the point of it all. The Primary E, though, we’re convinced, will open your ears to the joys of the long player.

Because the Primary E’s priority seems to be entertainment.

Sure, there are glimpses of dynamic insight and subtlety to its presentation, but it doesn’t try to walk before it can run. The Primary E confidently nails the basics, from an even tonal balance to a delivery that’s clear and clean and spacious enough to keep things coherent.

Decent body and substance cling reliably to every frequency, and that’s made all the more enjoyable by a spirited sense of drive and momentum.

And rhythmic drive and well-developed dynamics are also strengths of the rather splendid Onkyo A-9010 amplifier. This amp has been around for a few years now, and we are still hugely impressed with the quality of sound it can give for your money.

Start listening and it doesn’t take long to realise that Onkyo’s engineers have managed to deliver something special. The amplifier was tuned in the UK, and that decision has paid off handsomely.

It sounds cohesive and well balanced, delivering a sense of drive and attack well beyond what we would expect. There’s composure too – the amp keeps the multitude of instrumental strands in check even when the music becomes demanding.

Add the Onkyo’s superb timing and strong dynamic expression and you have an amplifier that makes listening to music fun. That’s a rare quality at any price – and of course that marries nicely with the Pro-Ject deck’s penchant for entertainment.

The A-9010 is happy across musical genres. It has enough refinement and insight to deliver John Williams’ Hymn to the Fallen (from the Saving Private RyanOST) convincingly. A decent amount of scale is on show here, but it’s the way the amplifier deals with dynamic shifts that impresses us most.

There’s a pleasing freedom to the way it hits peaks – and a surprisingly solidity too.

Its tonality is nicely judged. The Onkyo sounds open and lively in the treble but never veers towards aggression.

And that musical commitment to entertainment from the first two components in this impressive starter system is matched by the final piece of the puzzle.

The Dali Spektor 1s are almost toy-like in looks, not quite 24cm tall. Which means you will be able to find a place for them in the tiniest of listening rooms.

That diddy cabinet and the budget price don’t mean Dali has compromised on the drive units. The 11cm mid/bass driver uses one of the company’s distinctive wood fibre cones, just like the ones in the brand’s high-end products. Wood fibre is claimed to offer a good balance between rigidity, low weight and self-damping.

The 21mm dome tweeter is more conventional, but even here, Dali claims to use a lighter dome than most and, combined with the shaped faceplate, well controlled dispersion. This wide dispersion is the reason Dali recommends its speakers to fire straight ahead rather than be angled towards the listener. This recommendation rings true in use.

These speakers are fun. They deliver hard-driving beats and rhythmic flourishes with enthusiasm. They dig up plenty of detail too, and organise them in a musically cohesive way. Subtle instrumental strands aren’t ignored, and remain easy to follow even when the production gets dense.

These are small boxes so really deep bass isn’t even on the menu. But place them close to a rear wall and there’s enough in the way of low-end power and authority to keep us satisfied. The low frequencies are tuneful and rendered with agility, rather than grumbling-on in the manner of most rivals.

These are great all-rounders – indeed, rarely do we come across compact budget speakers with such a broad range of talents.

As we’ve said in the past, you can’t just grab any three five-star products off the shelf and expect them to perform together beautifully. But choose your products well, and you’ll find a synergy in your system for which you’ll be forever grateful. And here, we’ve chosen well…