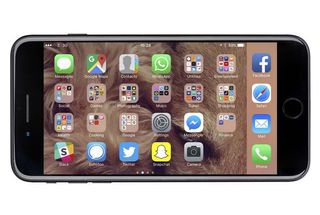 While we mulled-over what we'd like to see, we opened-up the question on our Facebook page. Replies ranged from the sensible, to the slightly strange, to the extremely unlikely. But we enjoyed them all the same.

With up to three new iPhones potentially set to be revealed - iPhone 7S? iPhone 7S Plus? iPhone 8? iPhone 8 Pro? - there's certainly plenty of scope for changes.

From hi-res audio support, to an upgraded pair of AirPods or even a 4K OLED screen, we've settled on this hit-list of new iPhone features we - and you - would like to see revealed next week.

No, we don't want the iPhone to morph into a tablet, but we wouldn't mind a few extra millimeters of screen real estate.

Buttonless and edge-to-edge displays, such as those touted by the Samsung Galaxy S8 and S8+, are all the rage, and it's about time Apple turned the iPhone screen into a show-stopper.

This was a hugely popular request from our Facebook followers, which comes as no great surprise.

You can already play high-resolution audio on your iPhone if you jump through a few hoops and add some third-party software, but it sounds like an iPhone that supports hi-res audio out of the box would be a deal-breaker for many people.

Given LG, Samsung and Sony phones are already there, surely it's time Apple joined the party?

But if Apple does insist on ignoring hi-res audio, we'd settle for native FLAC support.

It already looks as though iOS 11 will allow playback of FLAC files, so fingers crossed the iPhone 8 is going to play ball.

One could argue Apple's Retina display sounds a little dated compared to the glossy AMOLED and OLED screens touted by rival smartphones from Samsung and LG. Even if we have always enjoyed the iPhone's video performance.

But the iPhone 8 could change that image with reports that Apple has ordered 70m Samsung OLED screens for its new handset. Finally, we could see OLED on an iPhone. But will Apple give it a funny name?

Improved battery life is is another feature that's high on everyone's wish list, but will Apple want to make space for a bigger battery?

A super-slim design is always at odds with a big battery, while an OLED screen could also guzzle juice at a faster rate. Sadly, we'd be surprised to see an iPhone with a drastically-improved battery life.

Rumour has it the flagship phone will ditch the traditional EarPods in favour of the wireless AirPods. And both are decent in-ear headphones in their own right, even if the audio quality can be bettered for similar money.

But could we see a new pair of Apple earphones arrive on 12th September? Or simply better Siri integration? Or even just a choice of colours?

We were a little shocked at the asking price of the iPhone 7 and 7 Plus, so who knows how much of a hike we'll see for the new flagship iPhone.

Obviously, the relative weakness of the pound against the dollar won't help matters, but rumour has it you won't get much change from £1000 if your sights are firmly set on the top-of-the-range Apple phone.

8. The return of the headphone jack

Well, we can dream. This was the most popular request on our Facebook post, but let's be blunt, it isn't going to happen.

Apple dumped the 3.5mm jack when it launched the 7 and 7 Plus, so it's extremely unlikely to be resurrected for its most high-tech handset to date.

But hey, you could always add your own...