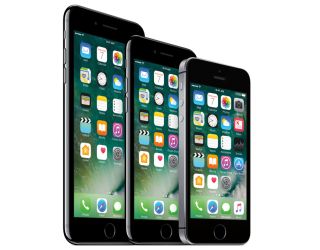 Promising, unsurprisingly, to be "the best iPhone that we have ever created", the iPhone 7 claims ten key new features, including a new design, new home button and IP76 water and dust resistance.

The iPhone 7 and iPhone 7 Plus come in new colours for Apple, including a new jet black finish, and are designed with a high-gloss, seamless unibody design, glass, aluminium and stainless steel.

The new iPhone 7 home button is 'customisable', with force sensitive control and new, more responsive taptic feedback, which can be programmed by third party apps.

There's a new Retina HD display for the new iPhones, promising to be 25 per cent brighter, adheres to the wide colour gamut cinema P3 standard and has a 3D Touch layer.

Apple also confirmed the removal of the headphone jack, focusing instead on the Lightning connection for audio.

The new iPhone 7 and 7 Plus will come with bundled new Lightning EarPods, as well as an adaptor for connecting 3.5mm headphones. Also new were the AirPods - Apple's completely wireless earphones.

And for the first time there are stereo speakers on an iPhone, promising twice the volume.

iPhone 7 Plus adds a 12-megapixel telephoto camera, allowing you to use both cameras to capture images. Both phones have 7-megapixel FaceTime HD cameras.

There's a new Apple A10 Fusion Chip - "the most powerful chip ever in a phone" - that promises to run twice as fast as the iPhone 6, while using less power.

There are new finishes, too, an anodised matte black and a jet black.

In a strange turn of events, Apple's official Twitter account sent out a tweet went at the start of the event, before Tim Cook, Apple CEO, had announced the new iPhone 7.

As well as a water-resistant body, the tweet - now deleted - appeared to show that Apple has indeed removed the 3.5mm headphone jack.

The iPhone 7 will be available from 16th September.

MORE: Apple Lightning headphones and the iPhone 7: what you need to know