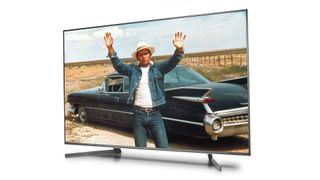 Whether you yearn for a set of true wireless headphones or a turntable, a 4K TV or a soundbar, a Bluetooth speaker or a hi-res audio Walkman, there's every chance Sony makes a pretty good one.

A consistent What Hi-Fi? Awards winner, Sony is of course one of the biggest consumer electronics brands in the world – and with that comes an extensive and varied choice of products. It's an especially great time to buy a Sony TV, with many 2019 models now generously discounted as 2020 models start hitting shelves.

Our pick of the best Sony deals online right now is as follows...

Sony 32in HD Ready HDR Smart TV £249 at Amazon
A near £100 saving gets you a decently specc'd, well-reviewed 32in TV for just £253. There's direct access to plenty of smart video apps as well as the benefit of HDR support.
View Deal

Sony KD-55XF9005 55in 4K TV £799 at John Lewis
Save £500 on this 55-inch Sony TV. 4K and HDR pictures should look fantastic on this screen while the solid stand makes it easy to install. X-motion Clarity tech promises smooth sports and action movies while HDR10, HLG and Dolby Vision support mean any high-quality video can be enjoyed.View Deal

Sony KD-65XG9505 65in 4K TV £1299 at Sevenoaks
Sony's 2019 XG9505 is a cracking TV at this nicely discounted price tag, offering a not-far-off-flagship performance for a lot less than flagship money.View Deal

Sony KD-65AF9 65in OLED TV £2299 at Richer Sounds
Sony's top OLED of 2018 was an absolute belter. In fact, it still is, and is well worth checking out with this incredible saving. Bear in mind that this model (like a few others here) won't be available for an awful lot longer.View Deal

Sony SRS-XB21 waterproof speaker £62.48 at Amazon
Waterproof, dustproof, and you can connect up to 100 of them via Bluetooth. There's a line light display built in that syncs up to the music for a party vibe, too. With a 12-hour battery life, as long as bright yellow doesn't put you off, it's a top saving on its original price.View Deal

Sony NW-A45 hi-res Walkman £129 at Amazon
A great-value little five-star hi-res music player that felt much more expensive than it was even at it's original price. It'll support DSD, FLAC and WAV files and also has a microSD card slot so you can significantly boost the storage here. View Deal

Sony PS-HX500 turntable £269 at Currys
Not only can this Sony deck help you archive your vinyl collection as hi-res digital files, it also sounds amazing, especially at this discounted price. A very capable entry-level deck.View Deal

Sony WH-1000XM3 wireless noise-cancellers £249 at Amazon
These Award-winning Sony over-ears combine noise-cancelling and Bluetooth to great effect. Comfort is superb, while the touch sensitive controls add flair. Add a 30 hour battery life and a serious saving, and you've got yourself a great Sony deal.View Deal

Sony HT-S350 soundbar £179 at Amazon
Be quick and you can nab Sony's 2.1-channel soundbar and wireless subwoofer combo for over £100 less than its original price at Amazon – a cost-effective way to level up your TV's sound.View Deal

Sony HT-SF150 soundbar £99 at Amazon
This all-in-one soundbar offers fantastic minimalism to your home while adding a hefty 120W of two channel, bass reflex, Dolby Digital, S-Force surround sound to your TV setup. That extends to smartphone streaming thanks to Bluetooth connectivity too. View Deal

Sony UBP-X700 £199 at Richer Sounds
An Award-winning 4K Blu-ray player at an affordable price. This Sony player is talented enough to make your DVD, Blu-ray and 4K Blu-ray collection shine. It can also handle HDR10 and Dolby Vision, and will even play your old SACD discs.View Deal

Sony UBP-X800 4K Blu-ray Player £294 at John Lewis
This Sony 4K Blu-ray player supports Dolby Atmos with DTS:X sound and HDR images with BT.2020 colour. What does that mean? A really very good quality picture if you feed it high-quality content. Plus you can stream music over Bluetooth to a suitable pair of wireless headphones for late night listening, too. View Deal

Sony HT-ST5000 Dolby Atmos soundbar £999 at Sevenoaks
This Sony soundbar was an Award-winner at £1,500, so is a cracking buy with this discount. If you want Dolby Atmos without having to fill your room with speakers, this is the way to do it.View Deal