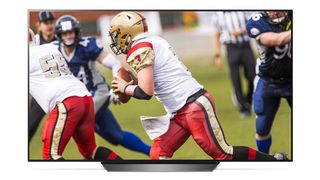 COVID-19 has wrecked many a sporting event this year – but not the NFL Draft 2020! Amazingly, the NFL Draft 2020 took place on the dates for which it was originally scheduled: Thursday 23rd – Saturday 25th April 2020, just without a live audience. You can find the full 2020 NFL Draft order below.

If you're not familiar with the NFL Draft, it's right up there with the Super Bowl in terms of excitement. It's where the top college football players from all over the States are divided up between the NFL teams, offering an insight into the fortunes of those players and franchises over the coming season.

The first of the seven NFL Draft 2020 rounds began on Thursday 23rd April with the Cincinnati Bengals selecting Heisman Trophy-wining quarterback Joe Burrow as the No. 1 pick. Ohio State's defensive end Chase Young joined the Redskins as the second and the Detroit Lions went for cornerback Jeff Okudah at No.3. See the full 2020 NFL Draft Order below.

Pick-kings for 2020, the Miami Dolphins - thanks to some wheeling and dealing, they secured 14 selections, including three picks in round one - bagged maybe a very smart move by choosing Alabama's Tua Tagovailoa at No.5. The quarterback had been looking on for a stellar college season until he dislocated his hip in November, paving the way for Burrow.

The draft continued on Friday 24th April with the second and third rounds. The big surprise on day two was the Philly Eagles picking quarterback Jalen Hurts. Meanwhile, Baltimore made a canny move, injecting fearsome running back JK Dobbins into their offense.

The twist and turns continued with rounds 4-7 as the Minnesota Vikings added James Lynch and DJ Wonnum, shoring up their defense in style and completing a great pick of rookies that should give them plenty of room under the salary cap.

The Cincinnati Bengals selected Kansas offensive tackle Hakeem Adeniji in round six, while Baltimore took home the best pick of round seven: Geno Stone. The young playmaker is already being dubbed 'the steal of draft'.

Over the three days, a total of 255 NFL Draft picks were made by 32 teams, all eager to get their hands on the cream of the college football crop.

Depending on the coronavirus pandemic, the 2020 NFL season will begin on 10th September with the Kickoff Game, hosted by defending Super Bowl LIV champions the Kansas City Chiefs. The season will conclude with Super Bowl LV on 7th February 2021, at Raymond James Stadium in Tampa, Florida. Sadly, all four London games have been cancelled this year.

But whether you're an NFL fan, college football connoisseur or just thirsty for some sport, keep an eye on the NFL in 2020 to see the hottest picks from the Draft in action. Read on and we'll show you how to live stream the NFL Draft 2020 on your phone, TV and tablet – from anywhere in the world.

Watch the NFL Draft 2020 for free live in the USA

The NFL Draft 2020 will be broadcast live on three TV networks in the States: ABC, ESPN and NFL Network (ESPN will also serve up a separate Spanish edition). ABC will show some of the draft on a free-to-air basis, but if you want to enjoy every glorious minute, you'll need to subscribe to ESPN or NFL Network.

No problem. Live streaming services such as YouTube TV, Hulu Plus Live TV, Sling TV and AT&T TV Now all carry at least one of the channels broadcasting the 2020 NFL Draft.

fuboTV – which features NFL Network for the NFL Draft 2020 – offers a free 7-day subscription. Outside the USA at the time of the Draft? Use a VPN, such as Express VPN, to access fuboTV from anywhere in the world.

Watch the NFL Draft 2020 live for free in Canada

In Canada, the NFL Draft 2020 can be streamed live on DAZN, which provides NFL Network coverage.

DAZN offers a generous free one-month trial period. It includes NFL GamePass, NFL RedZone and NFL Network 24/7. Provided you cancel the trial within the first 30 days, you'll walk away without paying a penny. If you don't, you'll be charged $20 per month on a rolling basis.

Not going to be in Canada at the time of the Draft? Get yourself a reliable VPN, such as Express VPN, and you'll be able to enjoy the DAZN free trial from anywhere in the world.

We'll look at the TV and live stream options for UK and USA-based NFL fans below, but even after spending all that money on a subscription package, it's highly unlikely you'll be able to use it when you're outside of your home country.

If you're working abroad, stuck in another country or just want to access live NFL Draft 2020 coverage from (almost) anywhere on the planet, it's a good idea to get yourself a VPN. A VPN (Virtual Private Network) can spoof an IP address which is local to the server you’d like to access. That way your TV service provider will think that you’re in the correct country – and allow you to watch the NFL Draft 2020 live.

So, whether you want to watch live NFL Draft 2020, enjoy another country’s Netflix library or just keep your browsing data private, then a VPN is well worth considering.

Once you’ve made your choice, all you need to do is sign in to your VPN service through whichever device you’d like to use to watch the action. When prompted to select a server, you need to pick one which is based in the country whose content you’d like to access. Then navigate to the relevant video streaming app or website and you’re in.

You can find a full list of the world's broadcasters with rights to show live NFL here.

Tune in to NFL shows Path to the Draft and ProFootballTalk on SkySportsAction from Monday. Sky will then show every Draft pick live across the three days, starting Thursday.

If you're an existing Sky customer, you can add all the sports channels to your package for £23 per month (Sky Sports Complete Pack). You can also stream the NFL Draft 2020 on Sky Sports via the Sky Go app.

If you're casual NFL fan, or don't want access to all the Sky Sports channels under the sun, purchase a Sky Sports pass from Now TV. Daily, weekly and monthly passes cost from £9.99 to £33.99.

Sky Sports Action and Sky Sports Main Event channels are also available on Virgin Media as part of the Bigger + Sport TV bundle. It's £72 per month but it comes with all the other Sky Sports channels and all the BT Sports ones too, including BT Sports Ultra HD. All of that brings access to just about every televised sports action you'd care to mention including Premier League, Champions League and Europa League football.

Not a Sky subscriber? No problem. NFL offers an International NFL Game Pass. The Pro (Annual) version is currently discounted to £7.99 until July 31st (normally £14.99) and includes the NFL Draft 2020 live and on-demand, along with highlight from the 2019 season.

Get an NFL GamePass for just £7.99
Available across multiple platforms and devices, the NFL GamePass serves up live and on-demand access to the NFL Draft 2020, plus a ton of juicy game highlights from the NFL vaults. You can even enjoy NFL documentaries and hear from top players. It's discounted until July 31st.View Deal

The NFL is also offering complimentary access to NFL Game Pass app until 31 July. Sadly the free version doesn't include live Draft coverage, but you do get to relive historic NFL moments from seasons past, including Tom Brady's Super Bowl victories and Odell Beckham Jr.'s impossible one-handed catch.

The Game Pass app is easy to use and available on Android and iOS mobile devices, as well as Google Chromecast, Apple TV, PS4 and Xbox One.