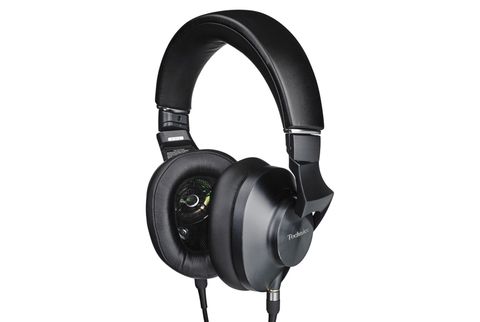 Premium design let down by sub-par sound; another disappointing entry from Technics

Testing Technics kit sends us on the same emotional journey as buying a lottery ticket.

Even after a run of two or three star reviews, including a streamer, two amplifiers and a pair of speakers, we still cling on to the glimmer of hope that the next Technics product to reach our test rooms will be ‘the one’.

The EAH-T700s are the brand’s first pair of headphones since their relaunch last year. An attractive amalgamation of aluminium and leather, they certainly look worthy of their hefty £900 price tag.

However, it soon becomes evident they lack the quality to trouble class-leading rivals like the Beyerdynamic T1 Generation 2s (£800) and B&W P9 Signatures (£700).

And as with our lottery numbers every Saturday evening, a sense of expectation soon gives way to disappointment.

The T700s certainly seize their opportunity to get noticed in what is, even at this lofty price point, a pretty crowded market.

The aluminium carbon-coloured ear cups, simply festooned by an engraving of the brand name, set the precedent for their classy yet imposing build.

They should be right up the street of those who, to paraphrase Will.i.am’s catchy ditty in Madagascar 2: Escape to Africa, like them big and like them chunky.

The thickness of the leather-coated headband cushioning is generous enough, while the earpads are made from Grancuir – protein leather made from eggshell that’s supposedly more lightweight and wrinkle-resistant than genuine leather.

But the most eye-catching part of the EAH-T700s is the striking 14mm super tweeter and 50mm dynamic driver, which are visible through transparent netting.

Technics has angled the two-way driver array to ensure a direct, clear sound, and claims the use of the driver, anti-vibration framing and aluminium housing will reduce unwanted vibrations.

The EAH-T700s are predominantly closed-back cans, but there are two small open panels on each earcup, which Technics says helps control airflow. They do cause a little sound seepage, so be aware of song selections and volume levels on a packed carriage.

You may be oblivious to any dissent anyway; the earpads clasp tightly on your head, creating a seal that blocks out external sound well.

The generously-cushioned EAH-T700s are comfortable, as well as versatile thanks to a typical headband slider, which has a small degree of horizontal adjustment so they can sit further back (or forward) on a head.

There’s no chance of forgetting their 470g bulk, which could take its toll on a transatlantic flight – like balancing a small bag of sugar on your head all day. But for listening to a few albums at a time they aren’t hard work at all.

This is reflected in the sound too; it’s immediately imposing but becomes tiring after a while.

Through a Chord Hugo digital-to-analogue converter (£1400) – a suitable partner to get the most from a pair of headphones this price – the EAH-T700s eat up Skepta’s Shutdown with their big, powerful and weighty persona.

Their presentation has the expanse to involve you in the opening background skit, and the directness and clarity for the brass and vocal to sound compellingly bold and upfront.

There’s plenty of life in the bassline, which is prominent, full and deep. While power and weight don’t always correlate with speed and agility, the Technics have the pace and willing to carry the track’s lively momentum.

Skepta’s rap comes through solid and clear, experiencing no problems getting heard above the dense grime beats, but while there’s a decent amount of detail across the Technics’ frequency range, they struggle to offer the level of insight or transparency of their Beyerdynamic rivals.

Through the Generation 2s, the attitude in his angst-ridden vocal seems far less tempered – more rightfully energised ­– and there’s a dynamic explosiveness and freedom you wouldn’t necessarily have detected having only heard the track through the Technics.

The Beyers display greater rhythmic dexterity and precision too. Where instruments can feel isolated from one another through the sloppily-timed Technics, the Beyers place the dripping chimes and breakneck percussion with purpose and greater regard for where they fit with everything else in the soundstage.

It’s not surprising then that the Beyers are better organisers of the jangly strings and permeating xylophone notes in the 2016 re-mastering of Fleetwood Mac’s Empire State, and they also provide more insight to the echo around the vocals.

By the time the electric guitars come in, the presentation through the EAH-T700s sounds as messy and disorganised as a teenager’s bedroom.

Play Mike Oldfield’s Tubular Bells, Part 1, and the Technics struggle to highlight delicate accents in the famous piano sequence too. In a nutshell, that lack of subtlety is their biggest downfall.

We’d like more refinement and restraint in the upper frequencies too. While the Technics’ forward-sitting treble helps give the impression of them being upfront and on its toes, songs with lots of percussion, Steve Miller Band’s Swingtown, for example, can be hard work.

The Technics EAH-T700s make a great first impression with a solidly built, head-turning design, but the competition is tough at this price and ultimately their poorly-timed and treble-heavy performance lets them down.

So it’s the same old story for Technics. A tale of something that promises much, yet regularly fails to deliver. All we can do is buy another ticket and hope that next time will be ‘the one’.