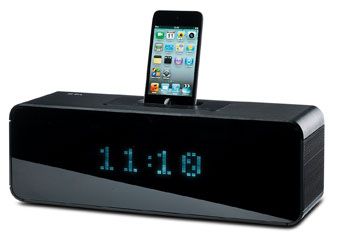 Slick design and some neat features can only get you so far: this dock just doesn’t sound good enough to be a contender

The compact SMC Stereo Boombox from STK, best known for its mobile phone accessories, is dominated by a large, comprehensive display.

As well as clearly displaying your choice of source – iPhone/iPod dock, FM radio or 3.5mm input – it doubles as digital clock, a pretty cool graphic EQ or – wait for it – a temperature gauge. Yep.

There are touch controls on the top and also a standard compact remote.

We like the design, but the same can’t be said for the sound. There’s some decent competition around and this dock just can’t punch in its class. Gem Club’s I Heard the Party sounds closed, and voices muffled.

Switch on the ‘3D sound’ mode and some treble appears but sounds snappy and lacks detail. The STK is simply outclassed by other similar products out there – even with its temperature gauge…