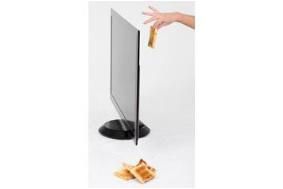 The ZX1 is just 9.9mm deep (thinner than a slice of toast, according to Sony's PR agency – hence the rather corny picture), and uses side-mounted LEDs to illuminate the screen instead of the usual backlight array. It was first shown at the CEATEC Show in Japan last year.

It also incorporates wireless HD technology, as we reported on from CES in Las Vegas earlier this month.

Sony's Bravia EX1 model also includes wireless HD connectivity, and its picture frame styling was created by Sony's European Design Centre. The EX1 is available in 40, 46 and 52in screen sizes.

We've already featured Sony's first OLED (Organic Light Emitting Diode) TV in What Hi-Fi? Sound and Vision. Unlike conventional LCD TVs, which require a back or side-light illumination system, OLED screens are self-illuminating. This results in a far higher contrast ratio, which in the case of the 11in XEL-1 is claimed to be 1,000,000:1.