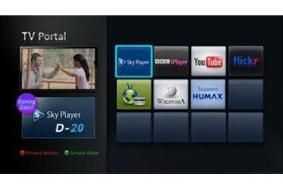 Humax has today announced that its all-new internet TV Portal will be available on the Humax HDR-FOX T2 Freeview+ HD set-top boxes this weekend.

To access the TV Portal, users need to connect their HDR-FOX T2 to their home broadband network and press the 'TV Portal' button on the remote control. They can then search and view a range of free on-demand and live streaming content, with no set-up cost or subscription required.

Sky Player is expected to launch on the TV Portal within a few weeks, at which time it will also be made available on Humax HD-FOX T2 set-top boxes.

Due to go live in January 2011, the Humax TV Portal is in beta testing this month. A menu screen will allow direct access to catch-up TV services, online content from the likes of YouTube and Wikipedia, and more.

The new TV Portal will come to both Humax Freeview HD boxes, the HDR-FOX T2 and HD-FOX T2.

Certain boxes will also be able to access content over your home network – there's DLNA support – working as a client or a server depending on your home set-up and which box you have.

Humax also suggests one box can stream to another, with the HDR-FOX T2 being capable of streaming to the HD-FOX T2.

We look forward to getting a hands-on just as soon as it goes live.