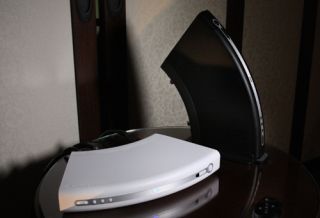 First seen at CES last month (see original story below), Monitor Audio's Airstream A100 is making its UK debut here at the Bristol Show. It goes on sale in March for £400. You can check it out for yourself in Rooms 206/208 in the Marriott Hotel.

Monitor Audio has unveiled its first ever amplifier at CES 2014 in Las Vegas, the Airstream A100, due out in March for £400.

Promising a marriage of Monitor Audio's traditional audio expertise with an eye-catching modern design and a host of wireless connectivity options.

The A100 has stereo RCA analogue inputs (and outputs), a digital optical audio input, a sub out and a front-mounted USB, but also majors on wireless music, with Apple AirPlay and DLNA on board.

There's also WiFi Direct streaming, or Airstream Direct as MA calls it, meaning you can stream music from an iOS device without a WiFi network and router.

The wireless streaming means you can access your music library on a Mac, PC, iPhone, iPad or iPod Touch, and you can even drive multiple speakers for a basic multiroom system from the AirStream A100.

Due for release in March, the Monitor Audio Airstream A100 is available in black or white, can sit vertically or horizontally.