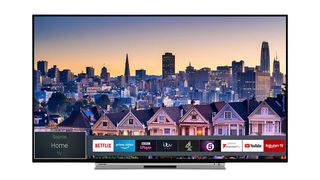 Toshiba is striking deep for the lower mid-range market with its L7 and L5 ranges of 4K TVs which hit the shops today ahead of an official launch at IFA 2019. With no fancy 8K nor OLED panel technologies, the Japanese tech firm has ditched the premium in favour of a value proposition for its customers, at least for now.

That proposition comes in the form of the £549/£449 Toshiba UL7A and Toshiba TL7A which come in 49in and 55in sizes. Differences between these L7 series models are purely cosmetic. Both are edge-lit LED TVs which are HDR-enabled with HDR10, HLG and Dolby Vision standards.

Powering the picture is Toshiba’s redesigned TRU Picture Engine which aims to provide motion processing, upscaling and micro-dimming to maximise image quality. Toshiba has partnered with Onkyo for the sound with two 15W speakers and a 12W subwoofer built into the rear. The TVs feature both DTS TruSurround and Dolby Audio processing.

The Toshiba UI has been updated and includes app support for Netflix, Prime Video, Rakuten, YouTube and iPlayer among others. There’s also a Freeview Play tuner for live TV.

Each L7 series TV is compatible with the Toshiba Connect, an Alexa-adding far-field microphone that was launched at the same time. This USB accessory adds some voice controlled TV-watching functions along with access to Amazon services and smart home devices.

The Toshiba UL7A will be available soon from Dixons, while the TL7A is sold at AO.com.

Their Onkyo-designed speakers are smaller, but the main difference is that the panels are direct or backlit by LEDs and so the screen is considerably thicker. They’re just as attractive viewed head on, but are a little chunkier in profile. But starting from £369 for the 43in model, they are modestly priced.

Toshiba has also launched the TY-SBX210 and TY-WSB600 soundbars, designed to fit TVs upwards of 32in. They are Bluetooth-enabled for music streaming and feature HDMI ARC connections along with optical and coax. The SBX210 is a standalone 100W speaker, while the WSB600 comes with a 20W wireless sub.