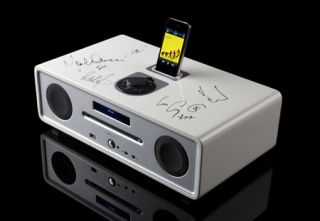 Signed during the band's Progress Live 2011 tour, and supplied with a letter of authenticity from Take That, the system was auctioned at the Nordoff Robbins O2 Silver Clef Awards in London on June 29th.

All the money raised will be donated to the charity, which is dedicated to transforming the lives of vulnerable children through music.