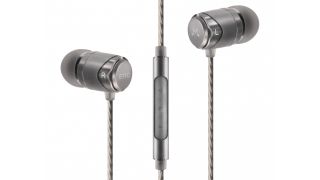 SoundMagic’s E10 in-ears have been one of the most successful products in the past decade, with their three variants (original, S and C) over the years having collectively won six What Hi-Fi? Awards.

Why? Simply put: they have offered bigger upgrades over smartphone-bundled buds than any of their competitors, for as little as £35.

However, considering they missed out on a What Hi-Fi? Award last year for the first time since their debut in 2011, with Beyerdynamic’s Byrons taking the budget in-ear crown instead, now seems a good time to try to muscle back into the sub-£50 space.

While the two new models utilise the same aluminium 3.5mm jack and come with the same puck-sized black carrying case, elsewhere they have been completely redesigned.

For one, the speaker and acoustic chamber have been upgraded over the E10.

The E11 and E11C are also supplied with new silver-plated copper cables, which have been coated in TPE to help reduce the impact of surroundings, and the ruggedness of their aluminium housings supposedly benefits from a new high-precision cutting processes.

As with the E10 range, the ‘C’ denotes the inclusion of a three-button mic remote, which allows users to make calls and control their music on both Apple and Android devices.

It seems the SoundMagic E11 range is the gift that keeps on giving, too. Following the E11 and E11C will be Bluetooth versions, the E11BT (updated over the E10BT), as well as the E11D Digital, designed specifically for USB-C devices.

Both are set to arrive within a month after the E11 and E11C’s release in October.

As for the SoundMagic E10 models, they continue, remaining the brand's most affordable offering beneath the E11 models.

With a pair of E11s having just landed in our test rooms, and the What Hi-Fi? Awards just around the corner, it’s nearly crunch time for SoundMagic’s new budget hopefuls.