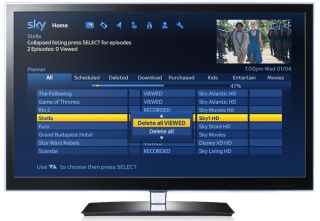 The update adds some new features to the TV Guide, including trailers for movies on Sky Movies and the Sky Store, and brings improvements to accessibility, parental controls and the Eco mode.

A small but not insignificant change is that the most recent recordings will now feature at the top of the first page of the Sky Planner, rather than at the end - saving you scrolling through pages of recordings to find your latest episode of EastEnders.

Upcoming recordings will now be in a new Scheduled tab and a new Smart Series Link feature will not only record all episodes of a current season, but also record all future seasons when the programme returns.

There's also a new ‘Delete All’ button, which will delete an entire TV series or group of recordings in one fell swoop, something which previously wasn't possible on Sky.

Sky also claims the Eco mode has been extended by 50%, with boxes now automatically switching off between 2.45 and 5.45am to save energy.

The update will begin rolling out today, and all Sky+HD users should have it by the end of June.