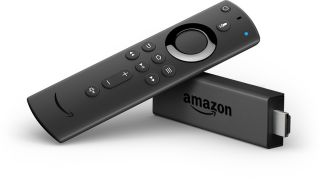 If you want to add streaming smarts to a 4K TV for a small cash outlay there's no better way than this nifty little device from Amazon. It's a simple plug'n'play dongle that plugs straight into an HDMI socket on the back (or side) of your TV.

Thanks to Amazon's End Of Summer Sale, which kicks off today, it's now just £40 (only £10 more than the standard, non-4K Fire TV Stick) – and we think that's money well spent (provided you have a 4K TV of course).

Amazon Fire TV Stick 4K was now £40
This is a great 4K video streamer at its normal price of £50, so with any money off it's a veritable bargain.View Deal

4K video isn't the only improvement over the standard Stick though: HDR has also been added, not just in standard HDR10 form, but also HLG, HDR10+ and Dolby Vision, making this the most format-friendly high dynamic range video streamer currently available. Alexa has been added, too, so that's voice control covered.

Just be aware that, being physically bigger than most sticks at 10cm long, the Fire TV Stick 4K will stick out quite a bit on the back of your TV, which can be tricky if it's wall mounted. There is, at least, an HDMI extender in the box that can solve the problem.

It also draws more power, to the extent that you should ideally use the USB wall plug that comes with it rather than plug the power cable into a USB socket on your TV - although the latter option does work.

Amazon Prime Video is the main offering, naturally, but you also get BBC iPlayer, ITV Hub, 4OD and Demand 5, while for local streaming there’s Plex and VLC, and for music you get Spotify, Deezer and Tidal.

Set-up is simple and once up and running images are sharp and detailed, with bright, vibrant colours. We detected a smidgen of motion judder, but otherwise picture quality is excellent for this type of product. Sound quality is good too and the Stick 4K can even handle Dolby Atmos surround sound. Impressive.

For just £40, the Amazon Fire TV Stick 4K has all the apps you need, supports all current HDR formats and throws in Dolby Atmos. That’s an astonishingly good deal.