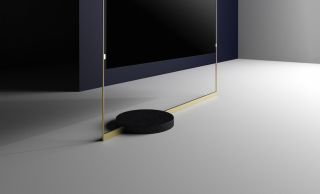 Wall art, poster art, lifestyle TV, wallpaper TV… whatever you want to call them, super-slim tellies that can go flush against a wall are being pitched as the future of television. Although they'll have to battle it out with Panasonic's transparent TV concept for that particular badge of honour.

We've already had our hands on LG’s OLED65W7 'wallpaper' TV, and Samsung offered a sneak peak of its Lifestyle TV at CES earlier this year. At IFA 2017 we also got wind of Toshiba working on a similar ultra-thin TV concept.

Loewe isn’t past the concept stage with its bild x TV, but quite frankly what we have seen makes us want to loosen our chequebooks already.

As you can see, Bodo Sperlein – Loewe's creative director and the guy behind the brand’s existing OLED efforts (bild 5, bild 7 and bild 9) – has suspended a thin OLED screen within a steel frame. The design relies on magnets, which Sperlein says has been inspired by the way sails are attached to a mast.

The frame can apparently have a polished black marble disc or steel ‘cross’ design, and is available in gold or black finishes. The TV can sit against a wall or rest on its stand.

By separating out the screen, frame and other components, the modular format of the bild x is designed to give owners a certain degree of flexibility and futureproofing.

While not confirmed, we'd hedge our bets that (like the company's other OLED models) the bild x will have support for 4K and HDR (probably Dolby Vision too) and come in a 65in screen size. Possibly 55in too. Also, considering Loewe's track record, it'll probably be priced somewhere north of £9000.

Naturally, such slim screens pose their own problems. Where will the electronics be housed? Where will the cables run? How will the speakers be implemented? That’s still for Loewe to figure out. Whether or not it’ll take cues from LG or Samsung is yet to be seen, but one thing's for sure: we look forward to seeing the finished article.

What is OLED? The tech, the benefits, best OLED TVs, OLED phones