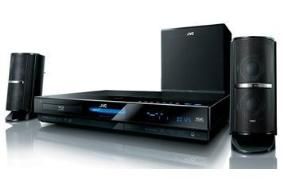 The NX-BD3 2.1 system – part of the company's Sophisti range – is DLNA 1.5 certified, enabling it to play back digital media files from a PC either via a wired or wireless home network. It can stream Full HD video files, as well as standard-definition MPEG videos, JPEG still pictures and MP3/WMA music.

Of course it will also handle Blu-ray discs and is Profile 1.1 compliant, supports 24fps, x.v. Colour, Deep Colour and has a single HDMI 1.3a output. However, it won't be upgradable to Blu-ray profile 2.0, says JVC.

The two front speakers provide sound for the left and right front channels and a 'phantom' centre mode from the two drivers at the bottom, plus 'pseudo surround' from the top two drivers. A separate subwoofer handles the bass. Claimed power output is 4 x 55w for the front and surround channels, and 200w for the subwoofer.

The speakers also incorporate JVC's K2 technology, developed in conjunction with engineers from the Victor Recording Studio in Japan. K2 uses special algorithms and high-bit quantisation to store high-frequency signals and sound energy that are usually lost in the CD conversion process.

JVC claims that K2 can upscale CD sound to DVD-Audio quality, and compressed formats such as MP3 to CD quality. That's quite some claim, and one we'll reserve judgement on until we test the product.

As for movie sound, the NX-BD3 supports Dolby Digital, DTS and Dolby Pro-Logic II. It includes an FM/AM tuner, has one optical digital input, one phono analogue input, HDMI-CEC (Consumer Electronics Control) functionality for one-remote control of other compatible devices and is finished in gloss black.