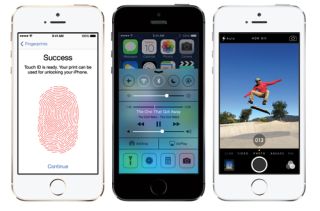 The iPhone and the iPad continued to be popular with consumers during the last three months of 2013 despite stiff competition from other manufacturers, if Apple's results for the first quarter ending December 28th are anything to go by.

The American tech giant reported record quarterly revenues of $57.6bn and quarterly net profits of $13.1bn, which it says were driven by smartphone and tablet sales and compare with $54.5bn and $13.1bn for Q1 2013 respectively.

Apple also reported all-time quarterly sales records for the iPhone and the iPad, with 51 million smartphones and 26 million tablets sold during the period, helped no doubt by the new iPhone 5s and iPad Air. This compares with 47.8 million and 22.9 million sales at the same point in 2013.

“We are really happy with our record iPhone and iPad sales, the strong performance of our Mac products and the continued growth of iTunes, Software and Services,” said Tim Cook, Apple’s CEO.

"We love having the most satisfied, loyal and engaged customers, and are continuing to invest heavily in our future to make their experiences with our products and services even better."

iPhone sales during the first quarter were boosted by stronger-than-expected performance from the iPhone 5s, with the company admitting in its earnings conference call that the premium version of its latest iPhone model sold more than it expected.

As a result, Apple said it had misjudged the supply and demand balance at which it expected the 5c and the 5s to sell and lost some units as a result, with not enough iPhone 5s models available to meet demand for some time during the quarter.

The first quarter also saw Apple enter into an agreement with China Mobile to distribute the 5s and 5c throughout mainland China from January 17th.

The deal will allow Apple to reach more than 760 million customers who are currently signed up to the China Mobile network. Many analysts saw the iPhone 5c as an attempt to build market share in China, where cheaper phones traditionally sell far stronger.

However, the iPhone 5c didn't ultimately drop the entry-price for an iPhone a great deal, as many had expected it might before the 'budget iPhone' launched.

One Apple product, however, that hasn't performed so well is the iPod. Despite seeing sales increase from the final quarter of 2013 (traditional Christmas period sales boost), the number of iPods sold by Apple were down 52 per cent in the three months to December 28th when compared with the same period the previous year.

Apple conceded it expects sales of the iPod to continue to decline in the current quarter, which suggests that more people are listening to music on their iPhones and iPads – making the most of its versatility and leaving the iPod redundant as an unnecessary additional device for many users.

It seems to us that Apple's next challenge will be to maintain iPhone sales over the coming months, with new smartphone models from LG – including the curved LG G Flex – and the Samsung Galaxy S5, both of which are thought to be coming our way here within the next couple of months.

And not forgetting the forthcoming tablet releases that will lock horns with the iPad, including the Galaxy NotePRO.

Of course, we're also keeping our ear to the ground for the latest news and rumours surrounding Apple's latest version of the iPhone – the iPhone 6.

We're not expecting to see it launch on these shores until the autumn, but speculation is, naturally, already mounting as to what features and specs it'll boast... See our rumour round-up for all the details.

MORE: iPhone 6: news, rumours and what to expect