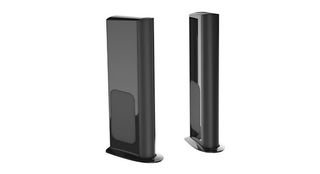 GoldenEar Technology has taken the wraps off its flagship speakers at CES: the Triton Reference.

These new speakers sit above the Triton One, the company's previous range-toppers which were launched at CES 2014. They aren't ordinary speakers, though, as they have multiple drivers and an active subwoofer built into each cabinet.

All the components and drivers in the Reference speakers have been specially developed for its flagship status, including the fully balanced crossover. They also feature subwoofer amplifiers and 56-bit DSP control units which are an evolution of the company's Triton One speakers and SuperSub subwoofers.

To add to the list of accomplishments, these floorstanders use one-piece cabinets, and are only available with a piano, gloss black lacquer finish.

For all the drivers and technology on show, you'd think the Triton Reference would have an eye-watering price tag. But, true to GoldenEar's philosophy of making "high-end affordable", the speakers are priced at a reasonable $4250 and go on sale in April.