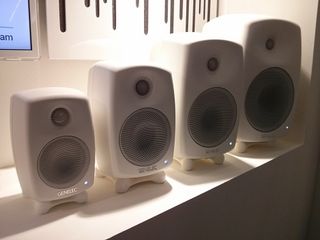 Finnish specialist Genelec, long a significant presence in the pro-audio world, is using ISE 2013 in Amsterdam to launch its first assault on the consumer audio market.

The G-series is a four-model range of active loudspeakers (winningly named G1, G2, G3 and G4) designed for wall- or stand-mounting.

The curvy cabinets (the look is a result of Genelec’s Minimum Diffraction Enclosure philosophy) are made of recycled aluminium, and each speaker features a pair of amplifiers: one powering the tweeter, the other the mid/bass driver.

The F-series is a two-strong range of subwoofers, discreetly modern lookers available, like the G-series, in black or white finishes.

The F1 features 40 watts of power, a downward-firing 17cm driver and has a claimed extension down to 35Hz. The F2 is more powerful (150 watts), bigger (a 21cm driver) and will apparently dig down to 27Hz.

Genelec is in the process of securing UK distribution and aims to bring the F- and G-series to retailers in the second quarter of 2013.