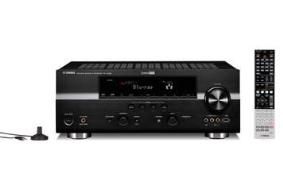 There are five new multichannel receivers, priced from £250 to around £800.

Note the use of the word receivers: unlike in previous years, all Yamaha's 2009 models come with an FM/AM tuner, so there are no amplifier-only models.

And none of them are equipped with DAB radio, network capability or Dolby Pro-Logic IIz. But all, apart from the entry-level RX-V365 (£250) will offer high-definition audio decoding.

The three entry- to midrange models will be available in May:

Arriving in July are the two midrange models, the RX-V765 effectively replacing the outgoing DSP-AX863SE (our 2008 Product of the Year) and DSP-AX763 multichannel amps.

Yamaha says it has undertaken special tuning on the RX-V765 and RX-V1065, adding new power supplies, capacitors and other high-quality components.

But, unlike in years past, there will be no specific "UK-tuned" models – the new range will be the same across all European countries.

Part of the reason for this, admits Yamaha, is that it wants to ensure it can meet demand by bringing in stock from other countries if necessary, and avoid the delivery delays it had with some 2008 models.

As for the lack of DAB, Pro-Logic IIz and network capability, those are features that Yamaha may add in the future if dealers and customers demand them.

For more information on these and Yamaha's forthcoming h-fi products, check out our latest blog.