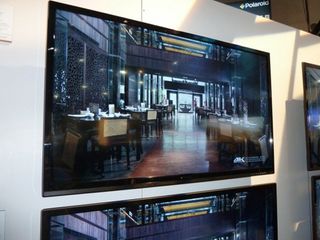 As CES 2014 continued into a fifth day on Thursday, highlights from the show floor included the emergence of budget Ultra HD 4K TVs.

We also have details of new products from Martin Logan, Sennheiser and Eclipse to share as home cinema and audio announcements continued to flow.

Bendy TVs, curved TVs, 4K, OLED, smart TVs – we've seen them all and most of them, if they make it into production, will probably cost an arm and a leg.

But hang on: we've also spotted two 'budget' 4K Ultra HD TVs – one from Polaroid and another from Australian budget brand Kogan.

Meanwhile, Kogan unveiled its 4K Ultra HD 55in LED smart TV powered by Android for AU$1000, which converts to around £550 on these shores.

MORE: Everything you need to know about 4K Ultra HD TV

Due for release in Q1 2014, the Crescendo will be available for $900 in the US. It will be distributed in the UK by Absolute Sounds.

Eclipse's Time Domain speakers have been given the wireless treatment with the addition of AirPlay compatibility for streaming from portable devices.

Eclipse says the new TD-M1s have been designed for use as desktop speakers or in conjunction with any TV, Blu-ray player or music system.

There's a dedicated iPhone app for use as a remote control, and the system will go on sale in mid-February for a US price of $1300.

It's common knowledge that the sound on most flatscreen TVs leaves a lot to be desired, so it's no surprise soundbars and soundbases have proved popular.

French speaker company Focal has combined the best of both worlds by developing a combined soundbar and (optional) subwoofer – the Dimension.

MORE: Focal Dimension is a soundbar and soundbase combined

Sennheiser has announced the launch of new earphones, which have been designed specifically for use with Samsung's Galaxy-branded devices.

The Sennheiser MM 30Gs are in-ear buds with a three-button inline control and microphone unit – and will not require an app for the controls to work.

• whathifi.com will continue to deliver all the latest news from CES 2014 as it happens. Follow us on Twitter and Facebook to make sure you don't miss out.

And we'll also pull together six days of audio and home cinema highlights into one Best of CES 2014 article – keep your eyes peeled for it!