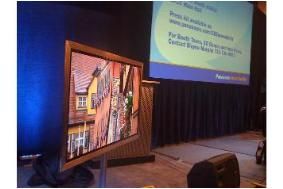 Flagship Viera Z1 leads the pack
The Z1 Series utilises most of the new picture technologies you'll see from Panasonic in 2009. These include: 600Hz Sub-field Drive to improve HD motion tracking; Viera Cast internet connectivity – including the new collaboration with Amazon Video On Demand announced today at CES; and new levels of eco-friendly energy efficiency, expressed by the names 'NeoPDP' and 'NeoLCD'.

Super thin TV unveiled at CES
But if it's thin you're after, the company has outdone even that. Today at CES Panasonic unveiled the worlds thinnest plasma screen. Pictured above, the 50in TV is less than one third of an inch thick, and uses Panasonic's new energy-efficient technology (described below).