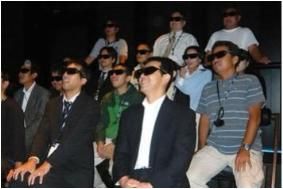 The centre, which will be located within the Panasonic Hollywood Laboratory in Universal City, CA, will accelerate the development of 3D Full HDTV (3D FHD) on Blu-ray disc and work directly with the Hollywood film studios to provide development services for 3D high-definition Blu-ray titles.

The company says the facility will be equipped with a plasma 3D Full HD home cinema system, a 3D-ready digital cinema projector (Theatrical Dolby 3D system) with a 380in screen, and a 3D-ready MPEG4 AVC high-profile encoder.

As we reported yesterday, Panasonic is confident it will bring high-definition 3D TV products to market by 2010.

"Panasonic recognises that for 3D FHD to succeed, just like Blu-ray, collaboration on reserach and development with studios and content providers is absolutely essential," says Eisuke Tsuyuzaki, managing director of Panasonic's Hollywood Laboratory.

"Panasonic is working assiduously with the Hollywood studios and Blu-Ray Disc Association to promote the 3D FHD system. The creation of the new Authoring Centre will enable Hollywood to start trial production and ultimately create commercially available 3D FHD titles."