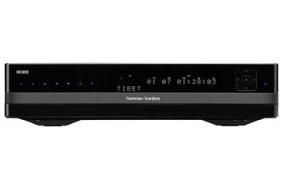 The DMC 1000 is designed to be the hub of your home entertainment system, with a 250GB hard disk that can store up to 60,000 songs, and provide simultaneous playback of four audio streams in four separate zones.

Each time a CD is loaded its contents are automatically loaded on to the hard drive. Content from the hard drive can be copied to compact flash, Memory Stick, SD, Mini SD and MMC memory cards or USB storage devices for playback on portable music players, mobile phones and other compatible devices.

If hooked up to a broadband connection, the unit can display track information and CD cover art. And if you have an iPod, it can be connected using Harman Kardon's The Bridge iPod dock.

But don't be fooled into thinking that the DMC 1000 is just a music playback device. Oh no. It can also play DVDs, and upscale them to 1080p via its HDMI 1.1 video output.