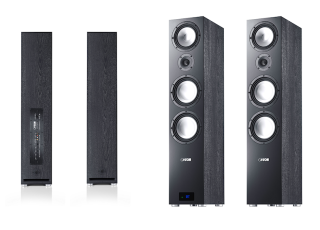 Active speakers (those with built-in amplification) are all the rage, but it's not often we see pairs with HDMI connections.

However, Canton's new GLE 496.2 speakers have three HDMI inputs (with 4K and 3D support) and one HDMI ARC output, as well as the more common optical, coaxial, analogue and aptX Bluetooth connections. There’s also a subwoofer output, giving owners the option to bring more bass onboard.

The GLE 496.2 BT is boxed with the same remote as the brand’s soundbases, meaning it shares some of the same features, including a stereo and virtual surround mode, a lip sync correction feature (over a HDMI connection) and a bass/treble equalizer.

The speakers borrow the aluminium drivers from Canton’s Chrono range, coupled with an aluminium/magnesium tweeter. An LED screen at the bottom of the master (left) speaker displays volume and input.

Canton’s active speaker range is due to expand next year, but the GLE 496.2 Active BT (available in black or white) will be available in the UK from April, priced £1400 per pair.