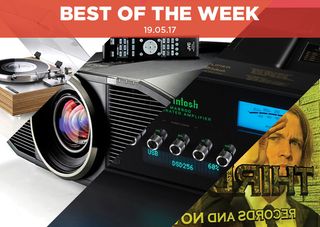 Sennheiser has celebrated its involvement with the V&A's Pink Floyd retrospective by releasing a special edition of its Momentum HD1 Wireless headphones.

Inspired by the 1973 classic Dark Side of the Moon, the headphones feature rainbow-coloured stitching on the leather styled headband, a prism symbol on the earcups and a 'Their Mortal Remains' nameplate.

The headphones go on sale in June and can be bought from Sennheiser's website for £380.

The MA8900 is the first to feature McIntosh's Monogrammed Heatsinks, which provide heat dissipation, while the MCD350 has a 32-bit/192kHz DAC, analogue stereo outputs as well as a coax and optical output.

They're believed to go on sale in June, but UK pricing is yet to be announced.

Harking back to the classic decks of the 1960s and ’70s, the retro-styled turntables are made out of triCom, which offers excellent damping properties. They can also accommodate a wide variety of 9" and 10" tonearms from third-party manufacturers.

There's no concrete release date for the 900s, but they are expected soon.

The Vinyl Festival is happening

Audeze's £2400 headphones have drivers 'the width of a blood cell'

New KEF Q Series speakers aim to be better than ever

PMC and AVM bring entry-level range to the UK

How to watch the Champions League and Europa League finals for free: in 4K, online, on mobile and in VR

Binaural audio: what is it? How can you get it?

So far, we haven't heard a Dolby Atmos soundbar we'd wholeheartedly recommend, but this Sony is set to change that.

It's a fantastic effort; a soundbar that boasts a distinct sense of space and movement both in front of and above you, making for a more immersive experience.

It's also quite possibly the most fuss-free way of getting Atmos in the home. Without a doubt the best effort we've heard so far.

While the Urbanistas aren't the most outstanding-looking headphones, their unassuming appearance conceals a terrific sound.

They're one of the best-sounding headphones under £100, producing a sound that's detailed and engaging, with smooth mids and a sweet treble.

The lack of aptX is a bugbear but, for the price, they blow their peers out of the water.

Let's get right to it; the JVC DLA-Z1 is one of the best projectors we've ever tested, offering some of the finest images we've seen in our test room.

It puts in a stunning performance, whether we're dealing with 4K, HDR or Full HD, producing excellent colours and superb contrast.

If you have £35,000 lying about, you should happily chuck it at this projector.