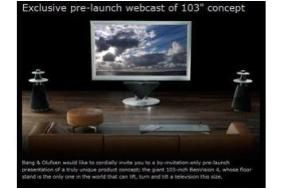 Bang & Olufsen shops will start accepting customer orders next month, but the company says it has customers clamouring to buy the TV, and has already taken some advance reservations.

The TV weighs a staggering 500kg, a substantial part of that being accounted for by the unique stand. This makes the BeoVision 4-103 the "only TV of this size able to blend into a living room," the company says.

Lift, twist and tilt
When not in use, the screen sits at floor level; it raises up, tilts and rotates into viewing position when the set's switched on.

A pair of actuators either side of the screen provide the motive power, backed up with gas-struts to take some of the weight, and the lift mechanism has been tested over 100,000 cycles, as well as being of the kind used in hospitals for moving patients.

Extensive safety measures have been put in place, given the sheer mass of machinery in motion: if the gas-struts should fail the actuators will lock out, while sensors in the stand constantly check the weight of the screen.

Should this suddenly appear to decrease, as it would were the descending screen to encounter an obstruction, the mechanism will stop, then raise up 2cm to allow the obstruction to be removed.

Continuous calibration
The company's VisionClear system is used as part of a comprehensive in-house video processing and picture-quality package. The system uses a probe to recalibrate the white, red, blue and green quality of the TV automatically every 120 hours' use.

Completing the TV is a new dedicated Beolab 10 active speaker system, located beneath the screen.