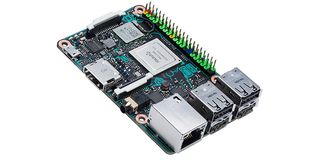 If you're working on your own programming projects then the Raspberry Pi - a £50 personal computer - is almost a household name. However, ASUS has given the Pi a bit of competition in the form of its 'Tinker Board', which can play 4K video and 24-bit audio.

For those wanting to make their own miniature hi-fi setup, this probably makes it the preferable option.

At £55 it's a bit more expensive than the Raspberry Pi, but also touts other benefits: it has 2GB of RAM (twice as much as the Pi), gigabit Ethernet connectivity and the latest generation of SDIO (Secure Digital Input Output) if you want to add any peripherals to the board.

However, while the Tinker Board runs on the same variety of Linux - called Debian - that the Pi runs on, it's not going necessarily to have the same developer support as the Pi. This means that, while you can theoretically accomplish more with the Tinker Board, it could be more difficult to get started.

Due to the fact that the product is yet to be officially announced, ASUS is yet to release any specifications on the board itself - including file compatibility. We will be sure to update this story with that information as soon as it is released.

MORE: Add wireless Bluetooth to any speakers with the Vamp Stereo