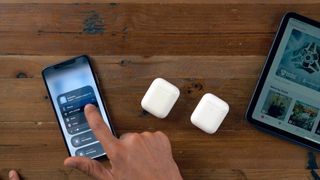 We may have only just got our hands on the vastly improved 2nd-generation Apple AirPods, but the ‘AirPods 3’ rumour mill is already turning. Apple analyst Ming Chi-Kuo, who has a decent track record, has suggested not one but two new sets of AirPod earphones could be with us by Q4 2019.

According to a report on Apple news site, 9to5Mac, one of the new models will adopt the same design and price-point as the second-generation AirPods (although whether that means the £159 base price or the £199 RRP including wireless-charging case isn’t clear).

In terms of features or aesthetic, little has been announced regarding the second set of AirPods that are reportedly in the works, aside from that tantalising ‘all-new design’ and likely a higher price.

Rumours suggest water-resistance and noise-cancellation are two likely feature improvements that will arrive with the next iteration of Apple’s truly wireless earbuds.